West Indies: Where it went wrong


Three episodes out of their control eliminated West Indies after the first round stage, despite them being one of the more impressive teams at the World Cup.

It started so well for the Windies

New Zealand's forfeit of Kenya, the Windies' washed-out match against Bangladesh and the Dilhara Fernando bouncer that concussed Ramnaresh Sarwan all played their part.

Had the Black Caps travelled to Nairobi, and avoided the fate suffered by group-mates Sri Lanka, they would have topped the group and allowed Carl Hooper's men in.

Hooper's hopes of wrapping Bangladesh up early were dealt a blow when he lost the toss, and the rain that intensified in the ninth over of the second innings left them needing to defeat Sri Lanka to progress.

Had Sarwan remained at the crease, or even been at his best when he heroically returned at the death, they may have achieved that easily.

In the event, his departure saw a quick loss of wickets and his return was too late.

This World Cup has confirmed the old sportsman's adage that you can only "control the controllables".

But for the Windies, several weaknesses were highlighted along the way.

The return of Brian Lara from the mystery illness that had kept him out since September completed an impressive batting line-up, several youngsters having matured in Lara's absence while on tour in India. 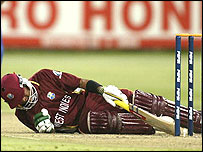 The complete package came off against South Africa in the opening game of the tournament, Lara scoring an impressive century before Sarwan and Ricardo Powell extended their total beyond South Africa's reach.

But the side was still suffering a hangover from that match when they took on New Zealand the following Thursday.

Lara aside, the form batsmen were in the lower-middle order - a problem quickly exposed when the Trinidadian was superbly run-out.

Sarwan, who starred with 75 against the Black Caps, was only promoted to fourth for the fourth match of the campaign, against Canada.

What should have been a romp against a side that regularly plumbs the depths of the Caribbean domestic one-day competition was made more difficult by the record-breaking John Davison.

Hooper contends that a fourth fast bowler is unnecessary because he would go for as many runs as the combination of part-time spinners he uses instead. 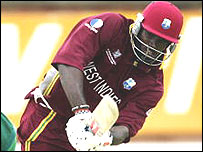 But that meant there were fewer options available to break partnerships and, with Pedro Collins and Nixon McLean out of form with the new ball, sides that made a fast start found it easy to stay in front.

Youngster Jermaine Lawson was given no opportunity to step into the breach, and showed what the side had been missing when he took two for 16 in eight overs against Kenya on Tuesday.

Chris Gayle came good in that final match too, hitting a century in the dead rubber, but the opener - tipped for big things in the tournament - was woeful in the important matches, as was partner Wavell Hinds.

Chaminda Vaas particularly enjoyed taking advantage of the clutch of left-handers at the top of the order, his swing accounting for three wickets in his first spell.

The fat lady did not sing for West Indies until New Zealand beat Canada the following Monday, but she had begun gargling long before that.

West Indies suffered dastardly luck throughout the tournament, but they did not help themselves either.


Email this story to a friend
Related to this story: