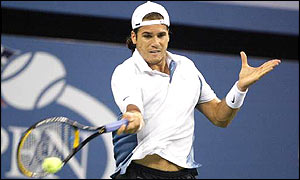 Haas is against a return for Boris Becker
Tommy Haas has shot down Michael Stich's proposal to draft Boris Becker into the German Davis Cup side.

Stich, the Davis Cup captain and 1991 Wimbledon champion, said bringing Becker out of retirement would re-ignite interest in the sport in Germany.

Ticket sales for their tie against Venezuela on 20-22 September have been slow, while there has been little interest from television companies to broadcast the match.

But Haas, the German number one, has threatened to withdraw if Becker is selected. "If Boris plays then I might not play," he said.

Haas, who lost to Pete Sampras in the third round of the US Open where he was the third seed, said his views were shared by doubles player Rainer Schuettler.

"We could nominate a pop group, and if they sing in the breaks we'll draw more spectators too."

Stich recently played an exhibition match against Becker in Berlin in front of a packed stadium, and television ratings were three times as high as any Wimbledon broadcast.

Stich was originally due to name his team on Wednesday, but the German Tennis Federation (DTB) have now said it will be unveiled on Monday.

DTB president Georg von Waldenfels has indicated that Becker is not likely to be asked to come out of retirement.

"I cannot imagine Becker could be selected if Haas and Schuettler were then to pull out," he said.

Becker, who retired after his last Wimbledon in 1999, inspired Germany to their first two Davis Cup triumphs in 1988 and 1989.

Tennis boomed in Germany in the late 1980s thanks to the success of Becker and Steffi Graf, but since their retirement interest in the sport has faded.

Links to more Tennis stories are at the foot of the page.