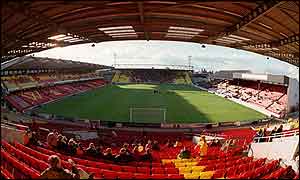 Vicarage Road could host European champions France
Israel could be set to play their 'home' Euro 2004 qualifying matches at the ground of English First Division side Watford.

Uefa have told Israel they cannot play the qualifiers in their own country because of security fears.

And that means Vicarage Road could now become the country's temporary home as they seek to make it to the finals in Portugal.

Israeli football association chairman Gavriel Levi travelled to London on Tuesday before being taken on a tour of the stadium.

"I don't see the situation in Israel improving over the next few months and we have to give Uefa an alternative venue to host our matches, " he said.

"Both the club and the local authority have agreed to let us use Vicarage Road."

Israel's first game at Watford could be against European champions France on 2 April.

Group One rivals Cyprus, Slovenia and Malta would also make the trip to England.

Links to more Europe stories are at the foot of the page.