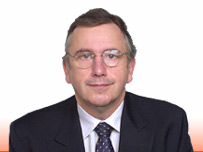 Chris joined the BBC the same day as Jeremy Paxman, as graduate journalist trainees in 1972. Before this he was educated at Oxford. After his degree in politics, philosophy and economics, he stayed on to complete a teaching qualification. But the lure of the BBC proved too great!

He was a political correspondent at Westminster and during the eighties was largely a reporter for radio and television.

He spent much time in Northern Ireland during the worst of the Troubles but reported from places as far apart as Ethiopia and Argentina.

For the last twelve or thirteen years he has been studio based as a presenter on radio and TV including the Today programme and PM on radio, and Breakfast, Newsnight and news bulletins on TV.

He is on the management committee of Middlesex County Cricket Club and is a lifelong supporter of Crystal Palace FC.

He has two grown up children - a son and a daughter. Both are university graduates and now sports journalists.