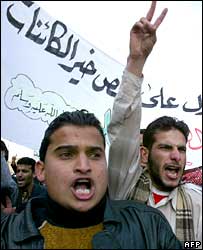 One of the few certainties in the world of journalism and editorial policy is that the age old tension between freedom of expression, freedom of speech and the right to robust and occasionally rude debate will, from time to time, come into conflict with the sensibilities of those who feel insulted or abused and minorities who can feel oppressed by the slights, real or imagined, of the majority.

The only uncertainty is when and why? Never is that more true than in dealing with religious sensitivities.

At the BBC we've had Christian outrage at the transmission of Jerry Springer the Opera, and Catholic anger at the commissioning of Popetown.

We have Jews understandably distraught at the desecration of their cemeteries or synagogues who see the BBC's reporting of the BNP and the broadcasting of BNP Party Election Broadcasts as the source of the problem.

Elsewhere we had Sikhs storming a theatre to prevent a play they regarded as sacrilegious. And of course Salman Rushdie can testify to the strength of Muslim opinion about the depiction of the Prophet Muhammad and the Koran.

BBC news has covered all these stories and more, and has had to steer a path through every one of these controversies. We have to do so within the context of our editorial guideline which says: "the BBC respects the fundamental human right to exercise freedom of thought, conscience and religion, this includes an individual's freedom to worship, teach, practise and observe a religious belief".

In a society which regards freedom of speech and expression as a fundamental right the underlying principle we apply to all our reporting is relatively straightforward. It is that in principle there is no subject we will not cover in our news bulletins. Nothing is censored. Nothing can be proscribed.

"No one has made an artistic case for the publication of the cartoons, in contrast to the well made case for Jerry Springer the Opera"
David Jordan 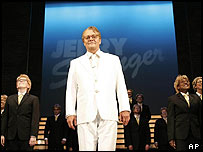 But in practice we operate within limits, some imposed by law and others self imposed, to our own freedom of speech.

The BBC's guidelines on religion also commit us to "reflect an awareness of the religious sensitivity of references to, or uses of, names, images, the historic deities, rituals, scriptures and language at the heart of the different faiths and ensure that any use of, or verbal or visual reference to them are treated with care and editorially justified. Examples include the Crucifixion, Holy Communion, the Koran, and the Jewish Sabbath".

So a clear editorial justification is required if the BBC is going to trespass on the religious sensitivities of Muslims at home and abroad by showing the Danish newspapers' cartoons of the Prophet Muhammad or the reprinting of them elsewhere.

Despite some inflammatory press reporting about the BBC here and in the Middle East, it was never suggested - nor was there ever any intention - that we publish the cartoons in the way a number of European newspapers have done. No one has made an artistic case for the publication of the cartoons, in contrast to the well made case for Jerry Springer the Opera. And it is unnecessary for the BBC to demonstrate our commitment to free speech by creating a programme for the purpose of them.

Nor is the BBC in the business of provoking parts of its audience for the sake of it, which might have been the motivation of some of those bent on the reproduction of the images in other places.

But BBC News has a duty to report the world to its audience and had to report the story of the sudden eruption of protest across the Muslim world. We had to show our audiences what Muslims are reacting to. As it happens we could do that with the sensitive use of the cartoons as displayed in the newspapers that have published them whilst minimising the possibility of offence to our Muslim audience by showing them carefully and sensitively. We avoided close ups and detail.

At the same time BBC News Online has not reproduced the cartoons to prevent someone who might be offended stumbling across them on our site. But News Online has links to the cartoons on the sites of others, so that a conscious decision has to be made by the user to access them.

This won't entirely satisfy those who want the BBC to publish and be damned. Nor will it mollify those at the extremes of Muslim opinion. But it does seem to have chimed with the majority of our audience and with, for example, the Muslim Council of Great Britain who have recognised the distinction between publishing to provoke and reporting to inform. It seems to be a civilised accommodation between the principle of free speech and the potential for offence.