As the row over the cartoons of the Prophet Muhammad has intensified, media executives - in television, print and online - have faced some difficult decisions. 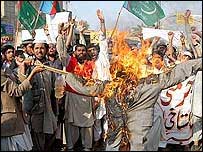 Should they publish the pictures and risk offending Muslim readers and viewers? Or by not showing them, would they be preventing the public from coming to informed opinions about the controversy?

Many people have rung or called the BBC complaining that the cartoons are not being shown on television news or the website.

Reports have shown brief glimpses of the pictures in some of the European newspapers which have published them, but no close-ups.

Lawrie May wrote: "You cannot report a news subject relating to a visual matter without showing that matter."

Other viewers said the BBC was being spineless, and Peter Arnold commented: "It appears that you are scared of the reaction from Muslims, while you were not concerned about offending Christians when you screened Jerry Springer - The Opera. This is a case of double standards."

George Deigton said he had had to visit the British National Party website to see pictures for himself. "It bothers a lot of people that have to pay TV licence fees then have to go to the BNP to get the real news," he wrote. 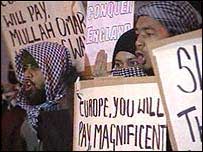 Michael Gleason was concerned on a practical level: "You ask for comments on the Muhammad cartoons but I can't find the cartoons on your website. How do you expect me to have an opinion without seeing the cartoons?"

But some viewers felt the BBC shouldn't be showing the pictures in any form.

"As a British Muslim, I feel very let down, insulted and misunderstood by the insensitivity of the BBC in even contemplating showing such disrespectful images," said Samia Rehman.

Peter Horrocks, the editor of TV News, said it had been a difficult dilemma.

"Obviously the BBC does not want to give offence to anyone on either side of this debate, so if people - whichever side of the argument they fall within - have taken offence, I am obviously concerned and apologise for that," he told NewsWatch.

"In reporting this story, we ourselves had to make a decision about whether we published the pictures in any form and inevitably that's made us part of the controversy. 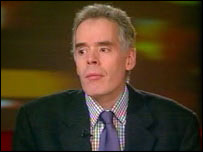 "We've taken the view that still images that focus and linger on the offending cartoons would be excessively offensive so we haven't used those in our television news pieces.

"We've used moving pictures of the newspapers where they've appeared to show people the context in which they've appeared and to give them some flavour of the type of imagery but without focusing closely on them."

Mr Horrocks said there wasn't a direct comparison with the broadcasting of Jerry Springer - The Opera, which had prompted thousands of complaints from concerned Christians.

"The BBC is not the primary publisher of these cartoons so to some extent it's different from Jerry Springer where the BBC was responsible for commissioning that programme," he explained.

"But clearly we've taken a decision not to go further than that in order not to gratuitously offend the significant number of Muslims in Britain but also - because we make decisions for our pieces to be broadcast internationally - the very significant numbers of Muslim viewers of BBC World television."

That international perspective was also an important consideration for the news website, according to Steve Herrmann, editor of BBC News Interactive.

"We recognised that among our users there is a wide range of different cultural sensitivities and that the images would cause genuine offence to some," he said.

"I believe we provided sufficient context for our users to be able to understand the story clearly"
Steve Herrmann
Editor, BBC News Interactive 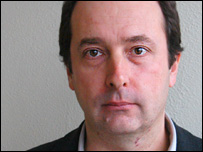 "We described the cartoons in detail in our stories and provided links to the newspapers' websites so readers who chose to could find out more and see the cartoons for themselves.

"Visually we showed a picture of a reader looking at one of the newspaper pages and linked to TV news reports in video which incorporated brief shots of the pages and the images on them. In doing all this, I believe we provided sufficient context for our users to be able to understand the story clearly."

Mr Herrmann said it was also important not to exacerbate the controversy by publishing potentially offensive images, rather than simply reporting on it.

"In addition, images on a web page can have an immediate impact on readers who will not necessarily have absorbed any of the context around them," he explained.

"When we cover any sensitive issue we have to balance our duty to report the story faithfully with our responsibility not to unnecessarily shock or offend our audience.

"It is not always an easy balance to strike, and much discussion and thought goes into decisions like these, but in making such judgements it is the interests, needs and expectations of our audience as a whole which are our guiding principle."