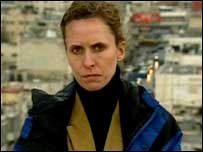 As Orla Guerin leaves the Middle East to become the BBC's Africa correspondent, she reflects on the challenges of reporting from the region.

The first crashing wave of noise was so immense I was ready to run for the door. Some sounds cannot be tamed by words and captured on a page. But it was, quite simply, the loudest and most frightening sound I have ever heard.

My host, though, didn't bat an eyelid. Gazans were already used to the terrifying noise of sonic booms. Israeli jets had been breaking the sound barrier regularly, in response to rocket fire by Palestinian militants.

It was early evening, and I was saying goodbye to Gaza, after five long years on the Middle East beat. I was enjoying the hospitality and the company of one of the BBC's greatest assets - Fayed Abu Shammala, the Arabic service correspondent.

Fayed and I were talking about the future and the past. Around the table were Alan Johnston, the BBC Gaza correspondent, and the team of Gaza producers, Hamada Abuqammar, Ibrahim Adwan, Tamer Al Mishal, and Rushdi Abualouf. All are men I would trust with my life, and have done in the past.

Between the booms, we carried on talking. Fayed's calm was echoed by his young sons, who never flinched. But they, like me, must have registered each deafening boom like a body blow.

The sonic torment continued for most of the night, almost every hour on the hour it seemed (I stopped counting at 4am). I was sleepless in Gaza - leaving, as I came, to the soundtrack of conflict.

I arrived in the BBC's Jerusalem bureau in December 2000 - in time for the early days of the second intifada, the bloody Palestinian uprising. Before I left, Israel had made its historic pullout from the Gaza strip in autumn 2005. In the years between, bloodshed devoured the region like a flame racing across a page.

With my colleagues in the bureau, I reported on ceasefires, international envoys, and peace plans - that came and went - on the death and extraordinary burial of the Palestinian leader, Yasser Arafat, on the stirrings of a new opposition in Egypt, and on the last Syrian troops slinking out of Lebanon. (By the way, what they say about Lebanon is true. If you think you understand it, someone has explained it to you badly.)

For five years my base was Jerusalem, the divided city with Jews in the west and Palestinians in the east, which is annexed by Israel.

When I moved into an apartment in west Jerusalem I could see the biblical town of Bethlehem from my terrace, and the hills of Jordan beyond it. By the time I moved out the view of Bethlehem was altered by a new feature on the landscape, all too visible to the naked eye - Israel's towering separation barrier, supposed to stop suicide bombers.

"Imagine for a moment that you have to ask someone else's permission to go to your work, your school, your doctor."
Orla Guerin 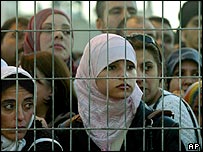 Living and working in west Jerusalem teaches you certain things - to listen for bombs, to count sirens (get to three and it usually means a suicide bombing), to drive away from buses in traffic, to watch for backpacks or anyone in bulky clothes. I won't miss any of that.

I won't miss the three hour security checks at Ben Gurion airport, complete with questions like 'Who do you live with in Jerusalem?' and 'Have you met any Arabs?' And I won't miss the Israeli checkpoints all over the West Bank.

Imagine for a moment that you have to ask someone else's permission to go to your work, your school, your doctor. And that you may be regularly refused. Palestinians, living under Israeli occupation, go through this every day.

In the weeks before I left Jerusalem I fell into the habit of asking everyone the same question: do you believe there will be an end to this conflict? I think I was grasping for a fragment of hope to take with me.

I didn't find any. No one, Israeli or Palestinian, said they expected a resolution and now with Hamas elected the position looks, if anything, more uncertain.

Over dinner in Tel Aviv, an Israeli official reminisced about how, as a young man in uniform, he was part of Israel's invasion of Lebanon in 1982.

"I came home wanting never to fight again," he told me. "But now I believe my children and grandchildren will grow up to be soldiers and they too will be fighting against the Arabs."

Across the divide, in an Arab restaurant in Israeli-occupied east Jerusalem I met a successful Palestinian businessman, who told me why he believed the two sides could not make peace.

"We are moulded from the same clay," he said, "obdurate and resilient. We deserve each other. We are two people claiming the same land. I believe the fighting will continue for another 30 years. There hasn't been enough blood."

Is he right? He could be.

I won't forget the words of an elderly, frail Palestinian woman in east Jerusalem, who spoke more powerfully than leaders on either side often do. She was filmed by a BBC cameraman as her world changed before her eyes.

Huge slabs of concrete were being dropped into position, right down the middle of her street. Israel's barrier was being constructed on her doorstep, cutting her off from friends, neighbours, shops, and from the rest of Jerusalem.

A group of Israeli women peace campaigners came to her aid, as she struggled down the road. As they took her arm, she turned and said. "God will be angry with us and angry with you. You are killing us and we are killing you."

What would it take for the killing to stop? 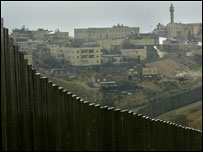 It was Amos Oz, probably Israel's greatest living writer, who defined the Israeli-Palestinian conflict as "a dispute about real estate". Until the real estate is divided - fairly - the bloodshed won't end.

Palestinians want a state, and an end to Israel's occupation. And many will keep fighting to achieve this. For their part, Israelis want security. Some doubt that the birth of a Palestinian state will end the bloodshed. But we can be sure of this - without a state, the conflict will never stop.

There can be few stories that are harder to tell. It is complex, contentious and involves two contradictory versions of history.

Years ago the New York Times columnist, Thomas Friedman, warned that "when it comes to the Middle East, people go temporarily insane, so if you are planning to talk to an audience of more than two, you'd better have mastered the subject." Quite so Thomas, quite so.

The madness, and tragedy, and beauty of this region are hard to shake off. The imprint sticks. I may have left the Middle East. But I'm not so sure it will leave me.

Just as I was about to board a plane for Africa, my new terrain, the Israeli prime minister Ariel Sharon fell ill. Instead of going to Johannesburg, I was drawn back to my old beat, covering the story from London and Beirut.

I have learned what generations of BBC correspondents learned before me. When it comes to the Middle East, it is never easy to let go. But having decided to move on, I'm swapping one compelling, exhausting and engrossing story for another - that will also be hard on the soul.

In my five years in the Middle East I was privileged to work with outstanding colleagues - Israeli, Palestinian, Canadian, Australian, and even the occasional Englishman. I was tear-gassed, shot at and threatened. And it was, without doubt, the job of a lifetime.