With the increase of user-generated content, or citizen journalism, how should broadcasters treat the material? 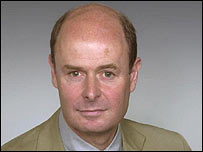 In the year of the Buncefield oil depot fire, Hurricane Katrina, the tsunami and the London bombings, thousands of images and eyewitness accounts poured into the BBC and other newsrooms. Many were broadcast.

On the web, thousands of bloggers - and millions worldwide - now give their take on the news, widening the potential range of views and sources available to the traditional media.

But how should the BBC and other news organisations use this material? Are the 'old media' doomed? What are the dangers and how will it change the way journalists work? And what exactly do we mean by citizen journalism, a term which many now feel is too all-encompassing and vague to be useful?

These were some of the questions discussed by BBC News staff last week at an internal conference - illuminated by e-mails from Newswatch correspondents.

The first thing that became clear was how rapidly the phenomenon is growing. BBC News executives say July 7th was a turning-point. They received 20,000 e-mails about the London tube and bus bombings - and some 300 images, including quite a few videos.

The ubiquity of the mobile phone camera helped the media illustrate the day's horrific events in a way that wasn't possible before. Still photos of the bus with its roof blown off confirmed this was a bomb and not a power surge, as London Underground had been suggesting. Footage and stills from tube train passengers helped pinpoint the time of the explosions, as well as conveying the choking atmosphere deep underground - leading the BBC's 6 o'clock bulletin the following day. One editor said that before the bombings they'd never have believed such coverage possible.

By last month, the one-time trickle of material had become a flood. On the morning of the fire at the Buncefield oil depot, the first picture reached the BBC within 13 minutes of the explosion. The first video was a few minutes later. By lunchtime there were 5,000 images, by the end of the day more than 10,000.

This incident also raised the most significant debate among journalists at last week's conference. One TV correspondent questioned what he called the tacky, almost voyeuristic tone in which BBC News and others urged the public to send in their pictures, at a time when it seemed possible that many people had died. It was agreed that this should be handled more sensitively.

He also asked why editors were so keen to run "appalling" images from mobile phones when they had high-quality shots from professional camera crews - in this case from a helicopter.

There was criticism of the most dramatic TV report about the fire, in which two amateur film-makers were shown potentially risking their lives to get better pictures. The men filmed themselves driving towards the flames and, in a piece-to-camera, one said that if there were another explosion they could be killed. The main BBC TV bulletins also ran an interview with them about their exploits.

This was too much for one editor, who said he was horrified at the Boy's Own Adventure nature of the item. 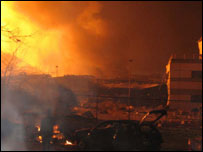 The piece was defended by one bulletin editor, who said it was an attempt to use the men as eye-witnesses as well as film-makers and to handle this new type of material in a different way - in the past the BBC would just have 'nicked' the pictures. The editor admitted that with hindsight the piece was slightly misconceived, but denied it would encourage others to take a risk - pointing out that there have always been freelances willing to take risks in pursuit of a story.

Another editor said that during the Bosnian war, the BBC had had to warn a number of wannabe foreign correspondents, setting out with video cameras, not to take excessive risks. It had to insist it would not run any of their footage, even if it turned out to be brilliant. The danger of too much risk-taking would be exacerbated if a market grew in such pictures, with agents encouraging people to seek big payments from the media.

One editor said the BBC needed to make clear that by soliciting pictures from the public it wasn't formally commissioning material. There was also a danger that children might be encouraged to take risks for a picture. At Buncefield, some had come up to the BBC team offering footage from their cameras. When told the picture was too shaky, they'd offered to go back and get better shots!

Now the BBC website carries a warning on its 'Your news, your pictures' page : "If you take a picture of any event you should not endanger yourself or others, take any unnecessary risks or infringe any laws."

The flood of extra material means the BBC website has had to take on a few more journalists to sift through the pictures and e-mails it receives. It's also exploring the use of new software to speed up the process.

The old media aren't going to be put out of business by citizen journalism, said one senior editor. But ways of working are being transformed, in a world in which someone with a laptop and the internet can do much of what the BBC has always done with studios, recording equipment and transmitters. "We're not gatekeepers any more, controlling the flow of information" he said. "We should use the new technology to engage better with our audience. They can help improve the quality of our journalism."

And there was general agreement that the term 'citizen journalism' was no longer helpful. It now covers a wide range of people with varying motives for sending in their pictures and stories. Some just want the story to be told, others are seeking a fat cheque. Some want to keep their local community informed, with a website or local TV station. Others - and this includes many of the bloggers - want to change the world.

Many people think the world of journalism is changing fast enough as it is.