Too many stars in their eyes?


From fishnet stockings to popular quiz shows, just how wise is it for BBC news reporters and presenters to cross the line into entertainment? Torin Douglas weighs up the pros and cons. 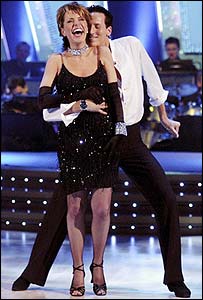 "There may be trouble ahead..."

The prophetic words of Angela Rippon, before she burst through her newsreader's desk to face the music and dance on the Morecambe & Wise Show.

Ever since, newsrooms have been divided on the wisdom of presenters extending their repertoire and combining news and entertainment shows.

Rippon showed not only that she had legs - decades before Kirsty Young stepped out from behind her desk - but that she was a brilliant dancer who could high-kick with the best of them.

And she has lived ever since with the headlines and judgements unleashed by that Christmas coup de théâtre.

Now another presenter-cum-dancer is facing the music and headlines.

When Natasha Kaplinsky stepped on to the red carpet at this year's Bafta film awards, it was the cue for another round of critical - some would say bitchy - newspaper comments.

The Daily Mail declared: "And the angriest presenter award goes to..." over a piece claiming the BBC Breakfast presenter had asked celebrities a series of embarrassing questions and demanded a make-up artist.

How did the paper know? "Unfortunately for 32-year-old Miss Kaplinsky, most of her comments were beamed to a press centre filled with hundreds of journalists," it reported. 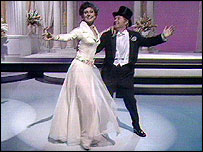 There, but for the grace of God, might go many presenters and reporters - and indeed editors and producers, if their talkback comments were broadcast to the press pack.

Of course, Kaplinsky herself might be having the last laugh after she was named Newscaster of the Year at the annual Television and Radio Industries Club awards.

The 32-year-old beat BBC colleagues Huw Edwards and George Alagiah to the title.

However, it's been open season on Kaplinsky since she made the jump from news presenter to fully-fledged celebrity in the hit BBC One show Strictly Come Dancing.

"Is Natasha really the Diva that her rivals say she is?" asked the Daily Express.

"She's the new darling of the BBC but, as her embarrassing performance at the Baftas showed, glamorous presenter Natasha Kaplinsky is beginning to suffer from her ambition."

Similar sentiments were echoed in The Daily Telegraph.

In fact, if there is any blame to be laid, BBC executives think it belongs at the door of the producers rather than the performer.

But there's a wider debate over newsreaders becoming celebrities, as Sarah Sands of The Telegraph noted: "The point about television news presenters is that they are hybrid creatures.

"They are not quite journalists and not quite actresses. When they take a step either way, it is at their peril."

The temptation to take that step is fuelled by the constant search for new presenters, as Wayne Garvie - the BBC's Head of Entertainment - made clear in an interview with the Guardian's Maggie Brown:

"A year ago, Garvie muses, he was struggling for presenters. Now the BBC has got Tess Daly and Natasha Kaplinsky. 'I think she (Kaplinsky) wants the glamour. She's been a revelation. To find two women presenters is a wonderful achievement this year'." 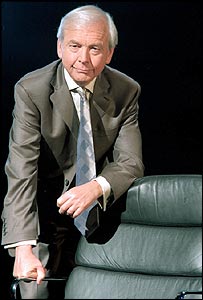 But though women presenters have borne the brunt of the criticism over the years, gender is not the real issue.

Views within BBC News are strongly divided as to the wisdom of allowing - and indeed encouraging - news presenters to venture into non-news areas.

Leaving aside professional jealousy, some BBC journalists feel a presenter's authority is diminished when they take on entertainment roles.

Some cringe when they see Andrew Marr or Jeremy Vine donning fishnet tights or punk garb for the now seemingly obligatory newsroom turn for Children In Need.

Others - including many viewers -see it as a highlight of the show and a sign that newsreaders are human after all.

And a whole chorus line of BBC journalists has taken part from Fiona Bruce to Michael Buerk.

The newsroom song and dance act is in a long BBC tradition, stretching back to those Christmas Morecambe & Wise Shows when Michael Aspel, David Dimbleby, Peter Woods and Richard Whitmore were shown cartwheeling across the screen in sailor suits, singing "There Is Nothing Like A Dame".

But it's not only musical shows that can cause tensions.

This could be seen as a natural extension of their day job - asking questions - and no-one would suggest it diminishes their stature.

But what about programmes like Have I Got News For You?

This relies on its panellists and chairmen making jokes about public figures - and, in some cases, becoming the butt of those jokes. 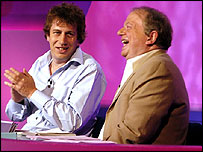 At one time it would have been unthinkable for a BBC journalist to appear on the show, but the precedent was set by John Sergeant, who freely admits he was told not to take part by his then boss, Mark Damazer.

"Tell them no - the instruction on the e-mail could not have been more emphatic," writes Sergeant in his autobiography Give Me Ten Seconds.

Sergeant, who was a comedy performer before becoming a journalist, proved a huge hit.

"The public response was extraordinary," he wrote.

"For the previous 10 years I had been a regular contributor to BBC television news and was therefore hardly unknown. But my appearance on a comedy show had somehow turned me into a person people wanted to know."

The crucial response, he said, came from senior politicians who might well have thought that the BBC's chief political correspondent should not appear on comedy shows.

Far from it: "No fewer than six members of the cabinet told me how much they had enjoyed it; and the Deputy Prime Minister John Prescott, often the butt of jokes on Have I Got News For You, was one of the most enthusiastic."

Soon Sergeant was appearing on Room 101, The News Quiz, the Holiday Programme, Masterchef and Call my Bluff - all on top of his normal work on BBC news. And this led directly to his being offered the job as political editor of ITN.

The BBC Producers' Guidelines offer little advice for news presenters considering extending their career into other types of factual programming.

But they do offer a word of caution about moving into drama and comedy: "Presenters of factual programmes should be aware that simulating their normal role in drama or comedy might carry risks for their own credibility and the credibility of the programmes in which they usually appear." 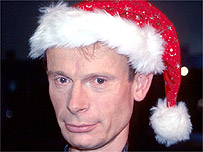 This hasn't stopped a spate of extra-curricular appearances in the last year or so, from Jeremy Paxman in Bridget Jones: The Edge of Reason and the BBC One comedy My Dad's The Prime Minister, to Dermot Murnaghan playing himself in the film Wimbledon.

At least two news presenters have appeared in Little Britain, and any number in the drama documentaries that have mushroomed in recent months.

Head of Television News Roger Mosey admits he takes a relatively relaxed view, though he urges extreme caution on those news presenters asked to do Have I Got News For You.

He said: "We tend to co-operate, not least because rival broadcasters such as Sky News are very willing to do so and there's a growing demand - at one stage we were getting two or three requests a week. Questions were asked when Spooks featured Sky News rather than News 24!

"The one thing we insist on is that there shouldn't be a full-screen shot of the presenter on their usual news set, so there's no confusion that this is a real bulletin. The guidelines say we also have to read and clear the script."

The perils are clear, but most presenters are healthily aware of the dangers of making fools of themselves when they step away from their day-job.