In the PM's presence


Keeping alert, filing reports for numerous BBC outlets and the curse of the plane phone... it's not easy travelling with the prime minister, says James Landale. 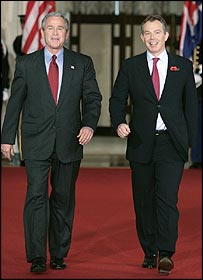 You never really sleep on a prime ministerial flight.

There is always the possibility the old boy might lift his head from his briefing papers and wander down the aisle with the ever-present cup of tea for a chat with the hacks.

Miss that and you might miss the only story of the trip.

So always choose an aisle seat and keep your eyes peeled.

And if a modest 40 winks becomes unavoidable, set the internal radar on high so you can detect a prime ministerial walkabout at 20 yards.

Not that Tony Blair does much wandering down the plane these days.

Time was he would often take a mile-high stroll as part of Alastair Campbell's strategy of keeping the media well-fed and buttered.

Up front, Alastair would concoct a story or two and his master would head aft and off-load the tales in our direction.

If truth be told, few of the stories were much cop. It's probably a gross indiscretion and breach of professional etiquette, but the Prime Minister has an uncanny knack of telling the collective media in private what he tells them in public.

Despite that, even he slips up occasionally and has now been stung too often.

The casual, plane-bound remark can explode on the world stage the moment the aircraft touches down.

When he travelled to Washington recently for an audience with the newly-anointed George Dubya, Mr Blair did not come down the plane once. 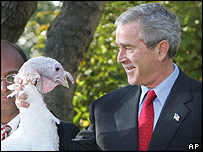 Andrew Marr and I flew to DC and back without a single sighting on the plane of the man we were supposed to be tracking.

The only way we knew that he was a fellow passenger, and had not sneaked aboard some luxury Blair Force One jet, was because our producer, the indefatigable and incomparable Lizzi Watson, had made sure he'd been safely filmed right up the aircraft stairs.

That said, I still did not get much sleep on the flight. What kept me awake, however, was not the prime minister but the telephone.

The plane phone is a ghastly invention. It means you can file early, often, and endlessly. So instead of a nice meal, a few hours' sleep, and a decent briefing, I am on the phone, doing multiple lives for News 24, PM and Five Live.

The only limitation is the relatively poor sound quality.

We arrive in Washington about midnight UK time - or "G" as BBC folk insist on calling GMT - and head straight for the bureau.

A few hours later, having filed for AM bulls, Bush, Breakfast, Five Live and the One, Lizzi and I slink to the hotel for a few hours' kip.

"The White House briefing room... a squalid little place where self-important scribes worry about who gets to ask the first question"
James Landale 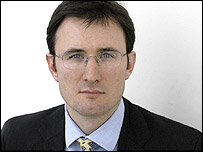 Up early the next morning and a brief scan of the US networks makes it obvious that the good people of the United States have only a passing interest in their visiting ally.

The bad news is that the heavens have opened. Very bad news for live reports.

The only consolation is that I am considered such a security threat that a poor White House official has to stand outside with me at the live point. She looks as miserable as she is sodden.

Inside, a few yards away, is the White House briefing room, a squalid little place where the crews hang out and self-important scribes worry about who gets to ask the first question.

There is a gorgeous West Wing moment when the President's spokesman, Scott McClellan, announces that the competition has begun to choose the turkey that Mr Bush will pardon for Thanksgiving.

At last, we are allowed into the East Room for the joint press conference. For once, we broadcasters are not asking the questions.

A deal has been done and it is the turn of the writing press to interrogate the leaders of the English-speaking world.

The British pack do immeasurably better than their somewhat ponderous American colleagues.

My former colleague, David Charter of the Times, even manages to ask President Bush what he thinks about Tony Blair being described as his poodle.

Andrew and I leave, and start filing like men possessed before heading off in the rain to the British ambassador's residence.

There we find the prime minister ready for a string of broadcast interviews. He is tired - as are we - but raises his game as Andrew puts him through his paces live on News 24.

Next up is the coldest place I have been to since I sailed across the north Atlantic four years ago.

Andrews Airbase is wet and exposed, and my shoes and coat finally give up the ghost. I do a couple of lives on the runway and have to stop my teeth from chattering.

But there, emerging from the gloom, is the plane, a haven of dry warmth.

We scurry aboard and bag the best seats, thankful to be out of the wet.

British Airways has kindly laid on some pyjamas, of a sort, and soon the plane is full of some very distinguished journalists and officials wearing shapeless grey tracksuits.

We could be part of a fashion-free cult.

In my aisle seat - naturally - I slump in exhaustion until Lizzi hands me the plane phone.

Time for a midnight hit. After what seems only a moment, she is back handing me the phone again. Time for that 6am Breakfast two-way.

As I say, the plane phone is a ghastly invention.