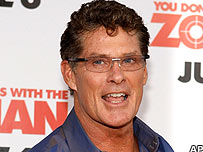 More than 6,000 people have already signed up to David "The Hoff" Hasselhoff's new social networking site since its recent launch.

He set up his own so-called Hoff Space because he was tired of fakes posing as him on other social networking sites.

The US actor and singer told BBC Radio 1 the site was about "getting a pulse on all the crazy people out there".

At the time of writing, his site www.davidhasselhoff.com had 6,740 members.

"I couldn't really get the internet together but because Knight Rider and Baywatch and this Hoff thing has taken off so much around the world, we put together our own Hoff Space," he said.

"I was on MySpace and Facebook and I was getting a lot of phoneys.

"A lot of people were coming in posing as me or my children and I had to stop it, so I opened my own that is going to be fun and I can regulate it.

"It's a way of going around the world from Russia, to Japan, to Europe and getting a pulse on all the crazy people out there."

Hasselhoff, who first came to the world's attention as Michael Knight in the cult TV show Knight Rider before starring in Baywatch, has also had a prolific music career.

His last single Jump In My Car hit the top of the UK and European charts, and the video was downloaded more than six million times.

He is currently appearing as a judge, alongside Sharon Osbourne and Piers Morgan, in America's Got Talent, or "America's Got Whackers" as he called it.

"I think I have seen every transvestite and every transsexual in America," he said.

"We found some pretty amazing talent this year. It is just good fun and we need good fun on television."

On his fellow judges, he said Sharon was "great" but refused to comment on Piers, other than that he liked to talk.

A new series of Knight Rider is in the pipeline but he said he will not be starring in it.

Instead, he said he was looking for a new James Bond-style series but remained tight-lipped about his latest project, which involves a game.