Apprentice 'off ill' on first day 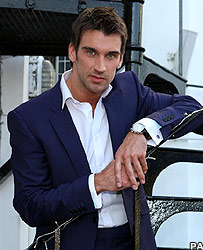 Apprentice Lee McQueen has called in sick on his first day of work for new boss Sir Alan Sugar.

The 30-year-old winner of the BBC's reality show The Apprentice phoned the office yesterday, saying he was suffering from a "flu-like virus".

He fell ill last week while on holiday with his girlfriend in Spain, and told bosses he wasn't feeling well when he returned at the weekend.

McQueen is expected to start work "in a few days".

A spokesman for Sir Alan said: "We've known he's not been well for three or four days.

"He's frustrated that he can't be at work because he wants to get going but he knows that he needs to be at home."

He also denied reports that Sir Alan was not happy about it.

"He's certainly not furious," he said. "People get ill and he understands that."

He was hired to launch a digital advertising product despite being caught out lying on his CV during the show.

McQueen's first day coincided with Sir Alan's announcement that he is to step down as chairman of computer and electronic firm Amstrad.

But the self-made multi-millionaire, who left school at 16 and founded Amstrad at the age of 21, has insisted he is not retiring.

He will be back on TV screens starring in a fifth series of The Apprentice next year.

Have your say: What have been your worst moments at work?