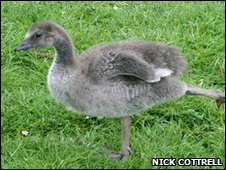 With the big freeze still in full swing - spring might appear to be a long way off.

But it would seem that it has arrived in the animal world - just two weeks late.

Washington Wetland Centre has seen its first eggs of the season - and they're not just any eggs.

They've been laid by the world's rarest goose - the nene. They're now being incubated and are expected to hatch in early April.

There had been worries across the wildlife world that the big freeze would severely disrupt mating patterns.

It was thought that there may have been an anxious wait for the first eggs of the spring - but in the end they arrived just a fortnight later than last year.

They were laid by the centre's Hawaiian geese - or nenes (pron: naynays).

The world's rarest goose - it is endemic to the Hawaiian Islands and is exclusively found in the wild on the islands of Maui, Kauai and Hawaii. 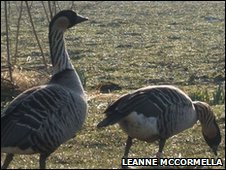 At one point there were just 30 nenes left in the world.

Hunting by humans and the introduction of predators such as mongooses, pigs and cats saw it near extinction by the 1950s.

But the species has now been successfully re-introduced.

Hundreds are now thriving in the wild as well as in wildfowl collections.

Getting Washington Wetland Centre's nenes to mate wasn't the easiest of processes.

Nenes are unusual in that they mate on land, unlike most other wildfowl, and can be very shy and reluctant breeders.

So every year, the wardens create willow wigwams to make the timid birds feel safe and to provide shelter as they nest and lay their eggs securely in the Close Encounters area.

"Despite the hard winter, the pairs are really active, so it'd be great to beat last year's record. They're such great, charismatic birds."