New name and sound for The Unthanks 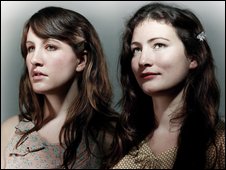 How do you follow up a critically lauded album which results in a Mercury Prize nomination and national recognition?

By disappearing from view and touring the world of course.

Following the 2007 release of their second album, The Bairns, Rachel Unthank & the Winterset couldn't really have known what was coming - after all they'd only released what was classed as a folk music record.

The Bairns reached the parts most folk music fails to reach, took them around the globe and found a place in the hearts of thousands.

Two years later they return with a name change - The Unthanks - a new band and a new sound - "a warmer, calmer, shade of sad".

Here's the Tender Coming is a huge move on up. It keeps one foot in the folk camp while creating a sound that will please those who think of folk as mildewy, hairy old blokes playing lutes and lamenting the repeal of the Corn Laws.

I met up with Rachel, Becky and sort-of-new-boy Adrian McNally at the start of September.

Adrian has helped shape the Unthank sound, he's managed the band, and now, after a baptism of fire, he's in the band, replacing pianist Steph.

"We can't help but be attracted to tragic and sad folks songs, because most of them are" 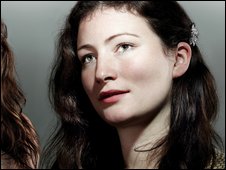 Rachel explained how the change of role came about:

"On tour to America, Steph had visa problems and wasn't allowed in. We had a tour to do. We knew she was leaving as she was finishing her PHD, so Adrian had begun working on her piano parts.

Adrian only had five hours to learn all the parts.

He said: "It was very scary. I didn't practise enough as a kid. It's working out though.

"I've always been in the background, helping shape the sound. Now I'm on stage."

Keyboard duties sorted, work on the new album could begin.

"We began recording and writing and were asked to go to the States to support Ben Folds," Rachel said.

"We were in motel rooms, either rehearsing for that night's gig or preparing material for the new album. I always carry my copy of The Northumbrian Minstrelsy with me, and my note books."

So what did America make of Northumberland's finest? It was a mixed reaction, according to Becky Unthank:

"At a Ben Folds gig, the audience are coming to see the headliner, so at some of the gigs they took to us, and others they just talked all over us.

"That's fine though, it was like starting again, it was good for us. It put our feet firmly back on the ground." 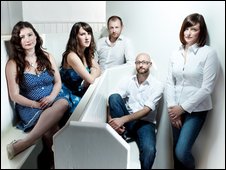 But what of this "warmer, calmer shade of sad"? Will it become the soundtrack to a big knees up?

"It's still quite miserable, there's nothing happy going on," Rachel laughed.

"We can't help but be attracted to tragic and sad folks songs, because most of them are. The musical landscape is a little warmer.

"I hope it still sounds as though it comes from us and the North East."

On a first hearing Here's the Tender Coming is certainly captivating.

At its heart and soul is the relationship between Rachel and Becky and their remarkable voices. At times, the tension between them is breath taking.

Coupled with the ambitious sound, this album will introduce this rare and exciting talent to a much larger audience.

Here's the Tender Coming is released on the 14 September 2009.

The Unthanks play Hall One at The Sage Gateshead on the 22 October.