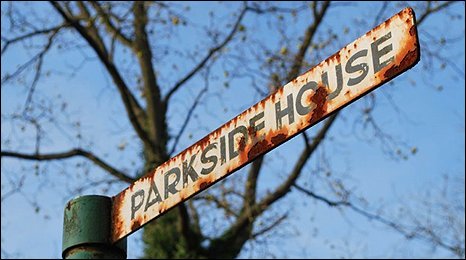 A lot has been written about the life of Marilyn Monroe, since her untimely death in 1962.

But much less is known about her time in Surrey, in the mid 50s, when she came to stay in Englefield Green.

Most information regarding her stay in the village has come from one source, author Colin Clark, in his two books.

However, not everyone agrees with his version of events, and full details surrounding her stay at Parkside House in Surrey remain a mystery.

With the help of people who worked at Parkside House or had some involvement in Marilyn's stay here, we can begin to piece together the real story of the silver screen legend in Surrey. 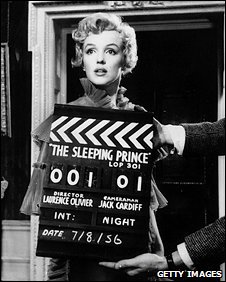 It was the summer of 1956, when the world's press turned their lenses on the tiny village, which had become home to one of most famous faces in the world.

Marilyn Monroe and her new husband, playwright Arthur Miller had moved from Hollywood, to a large mansion in Englefield Green.

Parkside House was hidden away in Wick Lane, a small country road which leads into Windsor deer park.

The film star was in the country to film The Prince and the Showgirl, with Sir Laurence Olivier.

Author Colin Clark, who was employed as an assistant on the film, kept a personal diary of events during the filming.

His journals were later published in two books "The Prince, The Showgirl and Me: Six Months on the Set with Marilyn and Olivier" and "My Week with Marilyn".

Extraordinarily, for all the press interest at the time, these memoirs are the only remaining record of her stay in the UK, in the public domain.

And some people who were connected to Parkside or lived locally at the time, and who had dealings with the famous actress recall a different version of events.

Marilyn's chauffeur's widow, now in her 80s, told us that she has letters and photographs from Mr and Mrs Miller, thanking him for his services throughout their stay, including driving them back to the house, through thick fog. 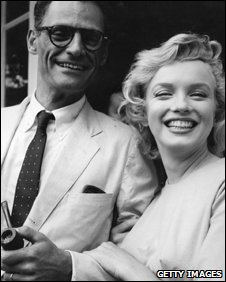 But her husband was never mentioned in either of Clark's books. She has no recollection of "Evans" the chauffer named in his account.

She also says reports of the star skinny dipping in the River Thames outside Windsor were unlikely, due to the water quality at the time.

Having spent time at the house and after hearing from her husband about his daily experiences as Marilyn's driver, she has many clear memories of events during that period.

And she doesn't agree with the stories about some people who have up until now, been linked by Clark and other authors, to the house and staff that summer.

According to the 2009 book "The Secret Life of Marilyn Monroe" by J. Randy Taraborrelli, a lady called Mabel Whittington worked as a housekeeper for Marilyn.

Sadly, after a nationwide search by a film production company, assisted by BBC Surrey, to track Mabel down, it seems no-one apart from the author has been able to verify her employment at Parkside

However, some local people do still have very personal memories of Marilyn and Arthur in Englefield Green, which have never been shared publicly before.

Nigel Hammett's Aunt Florrie lived in a small flat in Parkside House at the time, when she worked in the market garden.

As a 15 year old schoolboy, he recalls being very embarrassed and completely bowled over by Marilyn when introduced to her by his aunt. He says she was "stunningly beautiful."

And Patrick O'Shea, now living in Australia, remembers the day when Marilyn went shopping for shoes!

He told us his stepfather Frank Parker and mother Dorothy, ran a shoe shop at 42 High St, Egham called Woodmans.

One day a chauffeur-driven car pulled up outside and the driver came in, advising Patrick's parents that Miss Monroe required a pair of tennis shoes.

Having been handed a piece of paper noting her size, his stepfather duly boxed up the shoes, before the uniformed driver paid for them.

As he was leaving the shop, Frank asked would it be possible to have some sort of memento of the star's purchase from him.

Apparently, a few days later, her chauffeur returned with an envelope containing a signed photograph, which he gave to the couple, on the strict understanding it was not to be used for any advertising.

It was of Marilyn and Arthur cycling in Windsor Great Park, and showed her wearing the tennis shoes. 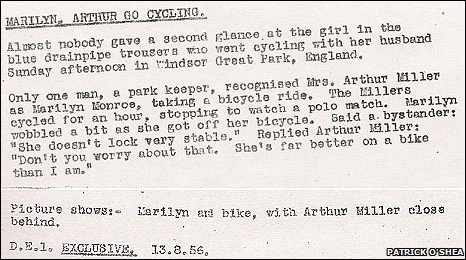 "I will say this - they look very happy in the photo and they were not too important to ignore the request from a very small local shopkeeper and give great pleasure to my parents. I am now probably the only one left to recall this very small event but big in my memory of course.."

"I now have the photo and smile with fond memories at the mention of Marilyn Monroe."

It is possible this was the same bicycle given to the star on her arrival in the UK, by national newspaper the Daily Sketch, in the hope of getting lots of shots of her riding it.

It was later reported that the paper's editor was somewhat disappointed that the only people ever captured on film using it, were members of Marilyn's staff!

But not everyone in the locality recognised, or was impressed by, the glamorous Hollywood star. 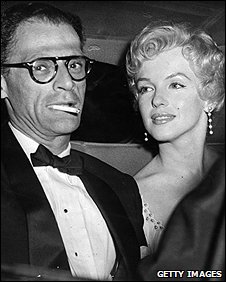 On 27 July 1956, Marilyn attended an evening house party at "Little Court" in Windlesham, on the invitation of the owner, actor Terence Rattigan.

PC 607 Jack Packham from Bagshot police station was on duty at the gates to keep out uninvited guests.

He had already waved through a string of famous faces such as Sir Lawrence Oliver with his wife Vivien Leigh, Dame Margot Fonteyn, Audrey Hepburn and John Mills.

A large black limousine pulled up and a body guard clambered out, waving a glass of champagne. He told PC Packham to let them through as it was Marilyn Monroe's car.

The constable was reported to have said "I'm sorry sir, I don't know the lady."

He did eventually concede and allow the car to continue to the house!

And according to retired policeman and local historian Ken Clarke, whose boss happened to be PC 607 in later years, Jack Packham was teased mercilessly by his colleagues at the time, for not recognising Marilyn.

We are trying to trace people who may have known, worked or met her (or her entourage) during her time at Parkside House.

Do you live in Englefield Green and can you remember her staying in the village?

E-mail me at BBC Surrey if you have any stories concerning Marilyn's stay in the UK.