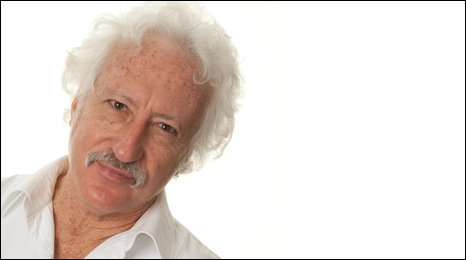 Bill Heine has always had a soft spot in his heart for people with power.

Throughout his life he's been trained to sow them the respect and deference they deserve.

Raised to be a good Catholic boy in Small Town America, Bill doggedly rose to the distinguished heights of chief altar-boy.

Then he was further conditioned by being sent to a military academy which turned Bill into a foot soldier for the Status Quo.

He learned how to use pistols, rifles and even howitzers before he was 18.

Bill consolidated his training to 'fit in' by going to a Jesuit University called Georgetown in Washington DC, where he indulged his passion for people with power by working in the United States Senate and the Executive Office of the President.

Now as one of BBC Oxford's chief political interviewers Bill never misses an opportunity to tug his forelock and genuflect before the high and the mighty.

Bill's recent interview with Gordon Brown was a classic case of just how fast a radio presenter can crawl up the underbelly of an issue and let the PM show just how powerful he is. But then Bill did, characteristically lob an easy one: "Prime Minister, are there times when you feel impotent?"

Strangely Bill's attempts to ingratiate himself with the great and the good have somehow not worked, and he is currently considering Plan B.

1. How did you get into radio?

BBC Oxford presenters were interviewing me so much about a few fights I was having with the Oxford City Council over things like a shark in my roof, that the bosses took me out for a long liquid lunch and said why don't you join us on the other side of the microphone?

2. What was your first broadcast?

They unleashed me onto an unsuspecting public on Halloween and the programme was very, very scary. That's all I remember.

3. What other jobs have you done besides broadcasting?

I've worked in the United States Senate and the Executive Office of the White House.

4. What would you like to be if you weren't a radio presenter?

5. What would listeners be surprised to learn about you?

6. Which person would you most enjoy being stuck in a lift with?

7. If you won the lottery, what would you do with the money?

Well that presupposes I know where I put the ticket.

8. What is your worst habit?

Car: I bought this hot rod off a little old lady from Pasadena but it turned out to be a lemon.

Job: I was a lifeguard and sat around in the sun and saved people.

Kiss: When I was three years old I kissed this cow called Malvolio, and I have a picture to prove it. Put me off sex for years.

Record/CD: I found The Dark Side of the Moon at a car boot sale.

10. What is your favourite?

Sandwich: I don't do sandwiches, they are so yesterday

Place in Oxfordshire: Living here is like living on holiday, I love it all

Song: Any part of Faure's Requiem or the Sanctus from the Misa Luba

Singer: Jackie de Shannon, a childhood friend who wrote and recorded 'What the world needs now is love'

Listen again to the latest programme