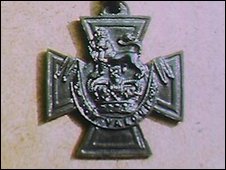 A campaign is continuing to put a memorial to Notts VC holders in the grounds of Nottingham Castle.

Fundraisers hope it will increase public awareness of these individuals and their heroism.

The Nottingham and Notts Victoria Cross Committee launched the £20,000 appeal in the summer of 2009.

There are several individual memorials around the county but the committee is keen to erect one that brings all the winners together.

Here we list those from Nottinghamshire who have been awarded the Victoria Cross. The criteria for inclusion is that the recipient was either born or is buried in Nottinghamshire.

Albert Ball is probably the most famous Nottinghamshire VC winner. He was born in Lenton, Nottingham and served with the 7th Battalion Sherwood Foresters and the Royal Flying Corps.

Between 26 April and 6 May 1917, Captain Ball took part in 26 combats, destroying 11 enemy aircraft. On one occasion he fought six enemy planes single-handed. He died on 7 May 1917. He is buried in Annoeullin in northern France.

Born in Bingham in 1875, Harry Churchill Beet, was awarded the VC during the Boer War. In April 1900 he stayed with a wounded corporal despite coming under heavy fire.

He managed to keep the Boers at bay until night fall when allied medics arrived to help the wounded solider. Mr Beet died in 1946 and is buried in Vancouver.

Anthony Clarke Booth was born in Carrington in 1846. He received his award during the Zulu war in 1879.

During an attack Colour Sergeant Booth rallied a few men on the south bank of the Intombi River in South Africa. He covered the retreat of 50 soldiers for three miles. All would have died had it not been for his actions. He died in 1899 and is buried in Brierley Hill in the West Midlands.


Robert James Bye was instrumental in knocking out two German defensive strong points at the Yser Canal in Belgium in July 1917. He died in 1962 and is buried in Warsop cemetery.


Near La Brique, Ypres, Belgium, John Joseph Caffrey, helped rescue wounded colleagues during the First World War. Together with a corporal, he was initially beaten back by shrapnel fire (the enemy was only 350 yards away) but they tried again, reached the soldier and tended his wounds.

While trying to return the soldier to safety the corporal was shot in the head. Private Caffrey bandaged his wounds, took him to safety, then returned for his other colleague. He died in 1953 and is buried in Wilford Hill cemetery (Nottingham southern cemetery).


Wilford Dolby Fuller was born in East Kirkby, Greasley, Notts in 1893. He was a member of the Grenadier Guards when, on 12 March 1915, he single-handedly captured around 50 men.

They were trying to escape along a communication trench at Neuve Chapelle in France. Fuller used a bomb to kill the leading man and the remainder surrendered to him. He died in 1947.


On three occasions during fighting at the village of Harmingnies near Mons in Belgium Charles Ernest Garforth saved the lives of his colleagues.

On 23 August 1914, whilst under heavy fire, he cut barbed wire, allowing his squadron to escape. On 2 September he helped free a sergeant who had been trapped under his horse. The following day he drew off enemy fire to allow another sergeant to escape. He died in 1973 and is buried at Wilford Hill cemetery in Nottingham.


Born in Nottingham in 1873, Sapper William Hackett was a miner who became a tunneller during World War 1. He became entombed with four others after an enemy mine exploded. He helped three colleagues escape but remained with the injured fourth. Both perished when the tunnel collapsed on them on 27 June 1916.


Samuel Harvey was born in the Basford / Bulwell area in 1881. On 29 September 1915 at the Big Willie Trench near the Hohenzollern Redoubt on the Western Front in France, the allies were running low on ammunition. Harvey volunteered to run back and forth over bullet swept terrain for 13 hours.

During this time he brought 30 boxes of bombs to the front line; an action that eventually drove the enemy back. He suffered a head wound but survived the war, dying in 1960.


On 22 April 1855, along with a fellow soldier, Private Bradshaw, Robert Humpston attacked a Russian gun pit which overlooked the Woronzoff Road near Sebastopol and captured it. Its destruction was of major importance during the campaign. Robert Humpston died in 1884 and is buried in the General Cemetery (Canning Circus) in Nottingham.


William Henry Johnson was born in Worksop in 1890 and served with the Sherwood Foresters. On 3 October 1918 at Ramicourt in France, his platoon was held up by a nest of machine guns. Sergeant Johnson worked his way forward and despite the heavy gun fire managed to single handedly charge the emplacement, bayoneting several gunners and capturing two of the machine guns.

He was severely wounded during the attack but continued to lead his men forward. After the first attack the platoon was again held up by machine guns. Once again Sergeant Johnson made a solo attack and silenced the other machine gains. He died in April 1945 and is buried in Redhill cemetery in Nottingham.


Born in Newark on 5 December 1854, during the battle at El Teb in Sudan in 1884, William Thomas Marshall helped save the life of a senior officer.

The Commanding officer of the 18th Hussars was severely wounded and surrounded by the enemy. Quartermaster-Sergeant Marshall, who stayed behind with him, seized his hand and dragged him through the enemy back to the Regiment, saving him from certain death.


Samuel Morley, saw action in India where, at Azimgurh on 15 April 1858, he saved the life of an adjutant of the Sikh cavalry who'd been dismounted and wounded. Together with a farrier, Private Morley helped shield the soldier's body until help arrived. Morley had been born in Radcliffe on Trent in 1829 and died in 1888. He is buried in the General Cemetery (Canning Circus) in Nottingham.


Born in the Meadows, Nottingham in 1918, Harry Nicholls, served with the Grenadier Guards. In May 1940, during the withdrawal of the British Expeditionary Force, near the river Escaut in Belgium, Lance Corporal Nicholls, although suffering from a shrapnel wound, led his section in a counter attack against the enemy.

At one point he grabbed a Bren gun, put three machine guns out of action then attacked the enemy infantry until he ran out of ammunition and was taken prisoner.

He was awarded the Victoria Cross posthumously, as he was believed to be missing, presumed dead. He was notified of his award by the Camp Commandant of Stalag XXA, apparently on the orders of Adolf Hitler. He died in 1975 and is buried in Nottingham's Southern cemetery (Wilford Hill cemetery).


Walter Richard Parker was part of the Royal Marine Light Infantry. He earned his award during the First World War.

At Gaba Tepe, Gallipoli in April 1915 he was a volunteer stretcher bearer. He helped take vital supplies to an isolated trench despite the fact many men had died trying to attempt the task. He reached his comrades, tended the wounded and helped the casualties to safety despite being wounded himself. Parker died in 1936 and is buried in Stapleford Cemetery, Nottingham.


William Raynor was born in 1795 at Plumtree, Nottingham and saw action in India in 1857. At Delhi, Lieutenant Raynor was one of nine men who defended an ammunition dump for more than five hours against heavy odds. With no prospect of help they destroyed the ammunition. Six of the nine died in the explosion. Raynor survived but died three years later in 1860. He's buried in India.


Born in 1901 in Oxton, Nottinghamshire, Robert St Vincent Sherbrooke served with the Royal Navy. On 31 December 1942 off the North Cape of the Barents Sea, Captain Sherbrooke was in command of HMS Onslow, a destroyer escorting a convoy.

On four occasions his vessel managed to repel enemy ships trying to destroy the convoy. Captain Sherbrooke was seriously wounded in the face and was temporarily blinded but continued to direct the ships under his command. He's buried in St Peters and St Pauls churchyard in Oxton.


James Upton was a member of the Sherwood Foresters. He was born in the Meadows in 1888. In May 1915 at Rouges, France, Corporal Upton displayed great courage all day in rescuing the wounded from the battlefield despite being exposed to heavy rifle and artillery fire. He died in 1949.


Sir Geoffrey Vickers was born in 1894 in Nottingham. In the trenches at Hohenzollern Redoubt in France on 14 October 1915 he held a barrier for several hours against heavy German bomb attacks. He ordered a second barrier to be built behind him to ensure the safety of the trench even though his own retreat was cut off. He survived despite being severely wounded. He died in 1982.


A member of the Rifle Brigade, Private Francis Wheatley was born in Ruddington, Notts in 1822. He was honoured during the Crimea conflict.

On 22 April 1855 he saved several lives by dealing with a live shell that had fallen into a trench. He first tried to knock out the burning fuse with the butt of his rifle. When this failed he picked up the shell and threw it over the parapet where it immediately exploded. He died in 1865.