Work starts to save iconic church 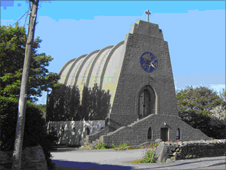 Work is beginning to restore one of Anglesey's most unusual churches, designed by a former Italian prisoner of war to look like a ship.

Our Lady Star of the Sea and St Winefride's is the Catholic church for Amlwch, but has been closed since 2004 when increasing damp endangered the electrics.

"Trying to keep the water out has been a constant problem since this church was built in the 1930s," admitted Chris, who's volunteered to help out with the project.

"We've had an expert look at it and they're going to use a specialist, flexible material which will move with the building and keep the damp out once and for all."

Chris has received much good will from the community who want to see this nautical-themed church saved for future use.

"It's right on the Anglesey Coastal Path and coaches come by especially to look at it," he explained. "It's not a building you expect to come across there, so it's become quite a landmark." 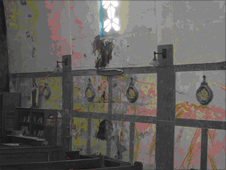 Our Lady Star of the Sea was designed by Italian engineer, Giuseppe Rinvolucri, who married a local girl after coming to Britain as a prisoner of war during World War I.

He designed a number of north Wales Catholic churches, including Porthmadog and Abergele. But while they are in the more traditional, Byzantine cross-style, he decided on something very different for Amlwch.

"It's shaped like an up-turned hull with portholes," said Chris.

Giuseppe's son told him his father would visit the site where he was going to build a church to soak up the atmosphere.

"He would then paint a picture and use that as the basis of his architectural work," said Chris.

"Sadly, we don't know any more about his thinking behind this unique church, although the family do still have that original drawing.

"But the beauty of his idea is that he created a church which respects where it is, set between the land and the sea."

Chris is particularly looking forward to seeing the effect of the light through the three glazed panels of the elliptical arch when the building is restored. 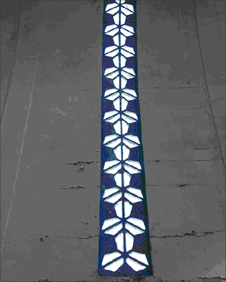 "They throw extraordinary light. It's almost like a lighthouse for sailors out on the sea, with three beams of light shooting up into the sky.

"And they bring exquisite natural light into the church, even on a dull day."

As a practising Catholic, Chris sees the importance of re-opening the church as a house of prayer for local worshippers who've had to travel to Cemaes and Benllech for mass.

He also hopes to secure further funds to build a hoist between the three levels of the church so older parishioners don't have to negotiate the outside steps.

"It was hard to raise all the money during a recession, and Amlwch isn't the most fashionable part of Wales, right on the edge of the Irish Sea away from everything," said Chris.

"But there is still great enthusiasm, and once we have the place watertight it's onwards and upwards."

Robert Jones of Beaumaris: I think it is worthy of mention how the whole mass of imitation stone frontage was done by one plasterer long gone called Llew (Inja Rock), whose pretty unique style of work is still to be seen elsewhere around town today. He once showed me how it was done, all with a little teaspoon. What patience and what a proven good job to stand the trial of time of 40-plus years without a great deal, if any, remedial work. A sound memorial to a good working man.