A musical tribute to John Martyn 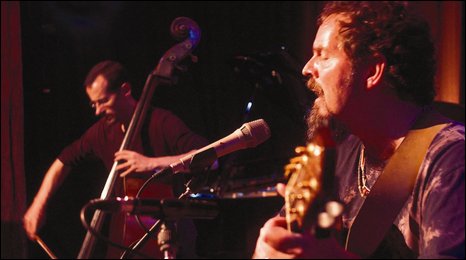 Keith James and Rick Foot will perform 'The Music of John Martyn' at The Wyeside, Builth Wells, on 21 November.

The pair were approached by their own and Martyn's fans to perform the work of the singer-songwriter, who died earlier this year.

The evening's entertainment will also include Keith and Rick's take on songs by Nick Drake and Sandy Denny.

Keith James is a songwriter and musician whose devoted, considered approach has gained him an ever-increasing following.

Rick Foot is one of the country's finest double bass players of great artistry and sensitivity.

The focus of the concert will be on the central integrity of the songs in their pure acoustic form, the majority of which will be selected from John Martyn's early albums, which included 'The Tumbler' (1968), 'Stormbringer!' (1970), and 'Solid Air' (1973).

Martyn achieved a lifetime achievement award at the BBC Radio 2 Folk awards in 2008 and was awarded an OBE in the 2009 New Year's Honours List.