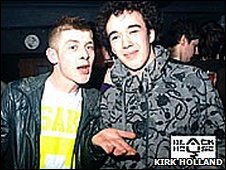 Kirk Holland from Aberystwyth tells us about the genesis of The Black House which aims to bring DJs and different genres of music into the mainstream Aber club scene.

The idea for The Black House came in 2007 when Todd Penfold and I decided to kick start the music scene in Aberystwyth with something fresh and new.

Anyone who spends any time in the area will see the vast amount of artists, talent, and untapped musical potential in Aberystwyth.

Along with a thriving university and a constant flow of young people in and out of the area, we always saw a huge potential for Aberystwyth to be a hub of music and entertainment in mid Wales.

"Without a stage to perform on, artists have nothing to aspire to, which can kill creativity and the joy of being involved in music"

There were a lot of good nights set up by promoters based in Aberystwyth but every event seemed to be isolated.

Our original idea and main ethos that we carry to this day is to encourage promoters and artists to work together to produce nights which appeal to everyone.

With this is mind, we started our first nights; Mixed Society in 2007 which was held at the then Yokos nightclub (now called Why Not) and featuring collaborations from Kontrol, The Aberystwyth Cheerleaders, The Panther Dance Society and some of the best up and coming DJs and bands in the area. The nights were a runaway success beyond our expectations.

2008 brought a few problems with regards to venues for our event. Enforcement of noise regulations meant many venues were unwilling to hire outside events.

After a few months, we started to realise the effect this had on music in Aberystwyth, not only for promoters but for artists as well.

Without a stage to perform on, many artists felt let down by the area, with almost all live and club nights ceasing and the usually vibrant scene feeling deflated. 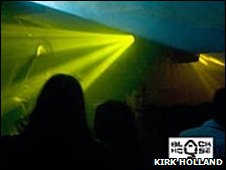 Without a stage to perform on, artists have nothing to aspire to, which can kill creativity and the joy of being involved in music.

At the beginning of the new academic year in 2008 and after long negotiations, The Bay agreed to re-open their infamous Bay Basement for us, a venue renowned for hosting some of the best home-grown events over the past decade.

We were really excited to be able to use The Bay Basement, a venue that many from this area have fond memories of.

We decided to try something different there, combining bands and DJs through the night, allowing us not only to appeal to a wider range of people, but to try and bring the live and club scene together, something which has never been done before.

Our first night was a Halloween Special, featuring the best bands from the area, including My Favourite Runner Up, Son Capson, Aband and Epitaph with DJs to finish off the night.

Our next night in 2008 followed the same layout, this time featuring Y Diwygiad and Valleum as our headline bands.

These two events were really important to us as we really wanted to see if the concept of bringing live music in a club atmosphere worked.

However due to limitations at the venue, we decided to stick to the club DJ format and separate the two, hosting club nights and live events independently from each other.

Come 2009, with a venue, ethos, and format for our nights, The Black House was born.

We really wanted to come up with a name, night, and brand that reflected everything that was happening around us (with some obvious links to the American Presidential elections!)

Putting ourselves out there as a value for money night, with more Welsh DJs per pound than anywhere else (10 DJs for £4 entry!) 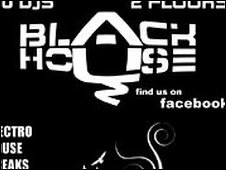 The first Black House on 31 January 2009 featured collaborations from Backbeating Sounds and Bay Radio, along with a stellar line-up of DJs including: B.Meakin, Tao, X2K, Rob G, Blunt and Ruffcut, bringing the best House, Electro, Breaks, Drum and Bass and Dubstep to Aberystwyth, spread over two floors in the Bay, with upstairs featuring reggae sounds from Backbeating and the basement featuring our DJs for the night.

With more than 900 people through the doors during the night, it was clear we had hit a nerve by bringing DJs and genres of music into the mainstream club scene in Aberystwyth.

Out of the whole night, the satisfaction of having people approach you at the end raving about our DJs who they loved, or a genre of music they had never heard before really put everything into perspective and gave us a clear aim.

With this in mind, the next Black House is carrying on in style, bringing more music to the people, bigger and better with more live visuals, lighting and good vibes!

If anything, it feels really good to give something back to the music scene in Aberystwyth, giving up and coming DJs and promoters a chance to work together and get heard by the people.

Our original venue for The Black House - The Bay Hotel - was closed down which led us to look for new venues and possible music events in Aberystwyth.

This is quite a hard task considering there are now only two nightclubs operating in Aberystwyth, both with a strict no hiring out policy.

However after negotiations and on the back of The Black House's success, we arranged to hire out Pier Pressure, Aberystwyth's main Nightclub, for a new event called Bounce which was held on Wednesday 7 October 2009.

This was the first outside event to be held in the venue for over a decade, with Doorly, probably the biggest rising DJ in the UK and Pablo Decoder headlining, and creating an amazing night and one to be repeated in the near future.

As for The Black House, our new venue is none other than the Aberystwyth University Students Union, with a capacity of more than a thousand people split into two rooms. It is by far the best and largest venue in the area.

The Black House will return on Saturday 5 December with High Rankin headlining, Brighton's very own Dubstep, and Electro DJ/Producer Extraordinaire.

We're upping the stakes for our comeback with live graffiti, full live lighting and visuals over both rooms and dance music to suite all tastes with a journey through Hip-Hop, House, Electro, Techno, Drum n Bass to Dubstep.

Following this we are hosting none other than the King of the Beats; DJ Aphrodite's long awaited Homecoming gig to Aberystwyth on Saturday 30 January at The Union.

Not many people know the godfather of Drum n Bass is from Aberystwyth and we're set to throw one hell of a party to welcome him back.