Flight of the Slingsby Firefly 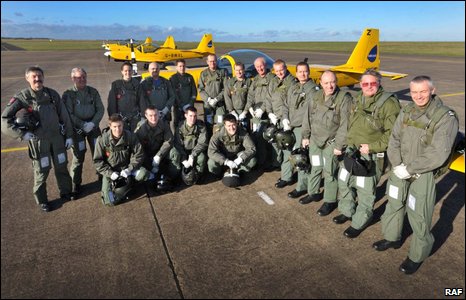 To mark the phasing out of the Slingsby Firefly, eight aircraft took off from RAF Barkston Heath to fly over Lincolnshire.

The Slingsby Firefly has been used as the first stage of flying training for all Royal Navy and Army pilots.

The Firefly is being phased out and is being replaced with the Grob Tutor, a smaller twin seat German trainer, painted in a gloss white colour scheme.

The Standards Department and 703 Naval Air Squadron took part in the fly past.

The aircraft was originally flown from RAF Topcliffe in the Joint Elementary Flying Training School (JEFTS) role comprising Royal Navy and Army units. The first aircraft flown used the 160HP engine and were painted in a white and blue colour scheme.

In February 1995, JEFTS moved to RAF Barkston Heath where the Army also joined JEFTS with the Royal Navy and the RAF in 1996.

Number 1 EFTS RAF Barkston Heath is a military flying training school which, through a mixture of military and civilian instructors, trains up to 130 Army and Royal Navy student pilots every year. 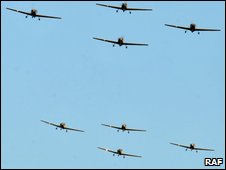 The school up until winter 2009, has been operating the Slingsby Firefly T67M260, a well-proven aircraft for the role of preparing military students for the intense training required to become an effective front line pilot.

Towards the end of 1997 the 160HP Firefly was replaced with the 260HP variant. The new larger engine gave a much increased rate of climb and range meaning students could fly further and higher than they had done before.

Barkston Heath is now operating under the name of Number 1 Elementary Flying Training School, the same as the RAF.

Since the 260HP Firefly entered service with the RN and the Army, approximately 600 RN pilots have seen their first stage of flying training on the aircraft alongside 700 Army students.