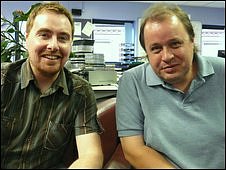 BBC Radio Lancashire's sport presenter Phil Cunliffe is mad for Marillion so he jumped at the chance to chat to the band's guitarist Steve Rothery.

Unfortunately, it wasn't to get much needed guitar tips for the station band which Phil plays in.

It was to talk about Marillion's sell-out gig at Burnley Mechanics Theatre in November as part of the 'Less is More' tour.

It is an acoustic tour and as such they have chosen intimate venues.

It will be the band's first appearance at the Lancashire venue and Rothery says they can't wait to get intimate with the fans in Burnley.

Rothery - who has been with the group since 1979 - told the Marillion fanatic: "It's an acoustic tour so we thought it would be fun to play different kinds of venues and it means we can go to certain areas for the first time.

"It also means we can go to nice little theatres or clubs. We're actually playing a cave down in Cornwall which is going to be interesting!"

"You can't deny the effect that had on our career; it's probably one of the reasons why we're still around now."

Less Is More will be the group's sixteenth studio album from the veteran rockers, who were formed in Aylesbury 30 years ago, and contains acoustic versions of previously-released material.

The five-piece, who also include Steve Hogarth (aka 'H') on vocals, Pete Trawavas on bass, Mark Kelly on keyboards and Ian Mosley on drums, play a variety on instruments on the new album including a glockenspiel, celeste, pipe organ, harmonium and a dulcimer.

He said: "It's mainly been acoustic guitar for me with a bit of electric on two or three songs, but I also play a Portuguese guitar given to me by our Portuguese fan club. It has an unusual sound, slightly eastern sounding and quirky."

Original singer Fish quit the band in 1988 after a string of top 40 hits including Lavender and Kayleigh - the latter reached number 2 in the UK charts in May 1985.

Commercial success has been hard to come by since the split although Marillion enjoyed a top ten hit with You're Gone as recently as 2004 and still command a large, loyal following.

At their height they played to 150,000 people at a festival in Germany in the 80's when they were special guests to Queen."We went up in a helicopter to see it and even from up there it looked big; a sea of people as far as you could see."

Rothery bemoans a lack of national radio exposure that prevents Marillion's music from being heard by new audiences and claimed some people's only association with the band will be Kayleigh.

"You can't deny the effect that had on our career; it's probably one of the reasons why we're still around now. If you have a track with that level of profile it's always there and it always reminds people of the existence of Marillion.

"But it's like a frozen moment of time; Kayleigh, Fish, 1985. When you think how many albums we've done since then and how many great songs we've written that people might not hear because it's not on the radio then that's a shame, but it's still a positive thing.

"We're not a tribute band to ourselves, it's really about the latest album - that's what the band stands for, so to play old songs the occasion has to be right," said Rothery.