Conservation queen born to be wild 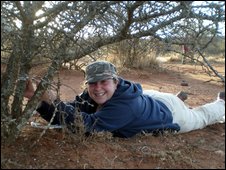 Preston's Louise Bell has always been interested in nature but it was the explorer Uncle Mac in Fraggle Rock who really fired up her animal attraction.

She is now a Research and Conservation Officer at Blackpool Zoo and loves life on the wild side.

From baking elephant cakes to drop the plop games and the odd trip to Africa - it's not your typical nine to five job.

And after a stressful day at the zoo she gets a p-p-pick up from the penguins!

"If you're having a rough day I simply head out and watch the animals. Penguins do a lot for stress."

According to Louise, there's never a dull moment working with animals; it's the nature of the job. She is in charge of raising awareness, fundraising and running education sessions for the eight conservation organisations that the zoo supports as well as academic research.

"If you're having a rough day you simply need to head out and watch the animals. Penguins do a lot for stress! "

What kind of things does she get up to then? "Well, I've hosted a 40th birthday party for Indra the elephant."

She baked a birthday cake made out of hay, straw, mashed potato and fruit which was a metre wide for Indra to raise awareness for the Biodiversity & Elephant Conservation Trust in Sri Lanka.

"I organise 'drop the plop' games where children shoot four rounds of elephant poop off the top of a traffic cone. Each cone is dressed as either a poacher, logger, village or conservationist. They earn more points for the baddies!"

She continued: "I also help groups build a pinata pig from cardboard boxes, flour and water. I use pig bedding and pieces of meat which we then give to the tiger to raise awareness of cat conservation."

Then there are her research trips to Africa. On a recent trip to Kenya to study tree damage caused by elephants she was caught short by a hippopotamus; but to her relief he was busy eating!

Louise explains: "There was no electric between 10pm and 6.30am so all toilet trips after these hours were by torch light. Our banda was away from the main building and animals often roamed past in the night. Our banda was frequently visited by large antelope, hyena and the odd elephant. "This particular night I happened to hear a movement in the bushes and when I shone my torch I discovered a hippo foraging away.

"He just grunted and carried on eating. I calmly went to the loo - although I was very excited - and then briskly walked back to the banda.

"Although they are one of the most dangerous animals in Africa they are still very graceful and it was great to see him," she added.

She wasn't so laid back when she heard a loud growl from the bushes, though, while measuring Acacia trees. "My team-mate Ben and I threw down the tape measure and just ran.

"Our guide was laughing so much we stopped running. He told us it was an impala and next thing we knew Bambi came trotting past!"

She loves Kenya so much she got married there to husband Jon in 2007 and her dream is to settle there one day."My ultimate ambition is to work in Africa on elephant conservation but that is years away."

Of all animals, she says elephants are her favourite. "The cutest thing I've ever seen has to be baby elephants especially really nosey ones when they lift their trunks up to see what's going on."

"Although they are one of the most dangerous animals in Africa they are still very graceful and it was great to see him."


Louise Bell on the hippo who caught her short

The Madagascan Hissing Cockroaches are the most fascinating, though. "They hiss through spiracles (holes) on the side of their body to mimic a snake. Chameleons are also amazing in their ability to change colour as a form of communication and defence."

She's surrounded by animals at home, too, with a collection of pets. She has a Hermann's tortoise, four cats, two cockatiels, fish, five giant African land snails and a bird aviary complete with two Senegal Parrots, a Prince of Wales Parakeet and a lovebird. She is a fosterer for Cats Protection and currently has three cats in pens in her garden!

She might be an animal lover but she would rather flies buzzed off. She doesn't like flies especially blue bottles after 'the Smash incident'. Louise is still traumatised after eating one in a bowl of mashed potato.

"It's hard to talk about even now," she said shuddering.