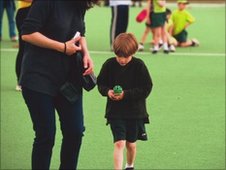 Senator James Perchard is to ask the Minister of Education Sport and Culture about the level of PE and competitive sports in Jersey schools.

He's concerned about where the next generation of Jersey sporting greats is to come from.

The Assistant Director of Education, Sport, and Culture agrees competitive sport needs to be encouraged in school.

Senator Perchard wants to bring back old-fashioned sports days in a bid to nurture young athletes for the 2015 Games.

"I think there has been a soft wishy washy left wing move over the last ten or 15 years to abandon competitive sport in schools over fears it would undermine children who did not excel.

"I do not accept this, I'm infuriated by this politically correct nonsense," said Senator Perchard.

Derek De La Haye agrees to an extent and says the department is looking at a number of initiatives to encourage children to take more of an interest in playing sport.

Senator Perchard is delighted that Jersey has won the bid to host the 2015 games but thinks the island needs to do more to help its sporting talent.

He said: "I actually make a call for parents to ask schools to end these meaningless participation type games and to bring back races, long-jump and high-jump.

"Yes there will be children that are better than others but it's a fact of life, it's preparing children for the realities of life.

"Learning to be not good at something is not a bad thing, it makes people more humble and better for it."

Have your say
Do you agree with Senator Perchard's view that more should be done to encourage competitive sports and behaviour in Jersey's schools? Or do you think all children should be given an equal chance?