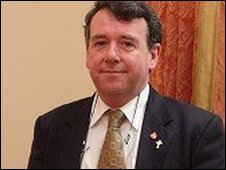 Deputy Sean Power has been chosen as the new islands new Housing Minister replacing Senator Terry Le Main who stepped down from the post.

In a vote of 28 to 20, he defeated the Chief Minister's candidate, Deputy Jackie Hilton in the second ballot.

Senator Alan Breckon fell out of the running in the first ballot after receiving the least votes.

None of the candidates secured half the votes so a second ballot with the two highest scoring candidates was called.

"I want to thank my friend and teacher Senator Le Main, he has taught me very well how to work in the housing department.

"I want to thank all members in the Assembly for the fair way they have treated me and for their vote.

Have your say
What is the first thing the new Housing Minister should do? Do you think Deputy Power was the right choice?

What he needs to do is to follow in the footsteps of Terry le Main who was an exceedingly good Housing Minister who had a very tough job and who should not have made to feel it necessary to resign. A TOUGH ACT TO FOLLOW, but I wish him luck.