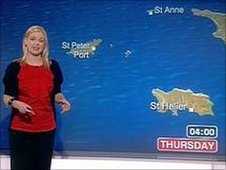 Jersey Tourism fears the island could be losing visitors because it doesn't feature on UK weather forecasts.

They think it could be costing the island tourism revenue, as people don't know how good the weather is

In an effort to attract more tourists, Jersey's government has allocated £500,000 of public money from a fund to help the economy.

The total number of arrivals to Jersey has so far fallen by more than 3% this year compared to last.

The 3% figure is all arrivals into the island including business visitors, people returning home and tourists.

Senator Maclean said: "It's a clever idea actually. I remember many years ago watching the national news, you'd always see the weather and they would mention the sunshine hours around the British Isles.

"Jersey would always feature very favourably, what we're keen to do is raise that issue again and see if we can get the sunshine hours and the quality of the weather we get in the Channel Islands back on the radar."

Money (around £250,000) from the fiscal stimulus fund will pay for a campaign to attract people who book their holidays at the last minute including a television campaign.

The industry is making a £50,000 contribution to the campaign, which will also feature radio and national newspapers.

David De Carteret says with visitor numbers not as good as they should be, Jersey needs to be better marketed.

Mr De Carteret said he has a plan: "We've got a very clear plan on that to promote Jersey through the normal advertising channels.

"We've got to make sure we bring in a lot more business because at the moment we're a little bit down on where we should be at this time of the year."

Senator Alan Maclean, the Minister with responsibility for Tourism said the money was essential.

"Last year we were able to put some additional funding in, which helped during the course of the recession, and what we saw as a result was that the staying leisure visitor numbers into Jersey held up reasonably well compared to most other jurisdictions.

"It's important to ensure we keep the tourism industry strong, it is very much involved in the local economy.

"This is an all in package in order to try and achieve that," said Senator Maclean.

Have Your Say
Do you think more money should be put into encouraging more visitors to Jersey? Do the weather maps make a difference?