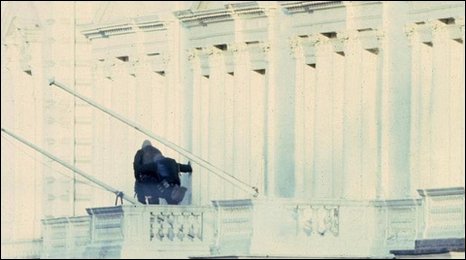 Listen to interviews, by BBC Hereford & Worcester's Nicola Goodwin, with former members of the Special Air Service, and their wives, about life in this elite regiment, and their base at Credenhill in Hereford:

Rusty Firmin was third in command of the troops that stormed the Iranian Embassy in London, killing five terrorist gunmen, and rescuing 19 hostages.

The terrorists had entered the embassy on 30 April, and for six days the world watched and waited.

On the sixth day the gunmen shot dead Iranian press attaché Abbas Lavasani , and dumped his body outside the building.

They then threatened to kill the rest of the hostages and blow up the embassy if their demands were not met, and so the call was made to send in the SAS.

Live TV pictures were broadcast to millions of people across the world, who watched as the SAS went in through the front balcony.

Rusty is now an author, and has told the story of the siege and its dramatic end in his book "Go, Go, Go!"

Len Owen fought alongside the SAS in World War II.

He was part of the Phantom Signals team, who hid in the forest at Moussey in France with the SAS, and were protected by the villagers.

140 of the men and boys from the local area were killed by the Germans, after they refused to betray them.

Len successfully campaigned for a memorial to the villagers which was unveiled at the National Memorial Arboretum.

He lives in Lichfield.

He applied for service with the Special Air Service Regiment in 1959 and set a record as the youngest person ever to pass selection at the age of 18.

He was with the SAS for 26 years and saw active service in every special operation between 1959 and 1985.

He also ran the SAS selection course, until he retired from active service in 1985.

After retiring from 22 Special Air Service Regiment, John set up the Survival School at Hereford.

He's the best-selling author of The SAS Survival Handbook: How to Survive in the Wild, in Any Climate, on Land or at Sea.

He lives in Hereford with his family.

Pete Scholey, joined the regiment in 1963 and fought in all the major conflicts until 1986.

He is the author of 'The Joker' and 'SAS Heroes: Remarkable Soldiers, Extraordinary Men'.

He's actively campaigned for more recognition of the work done by the men of the SAS in past conflicts.

He lives in Hereford with his wife Carolyn.

The present SAS is made up of four fighting squadrons: Each is sub-divided into four troops specialising in air, boat, mobility and mountain tactics.

The regiment moved to Bradbury Lines, Putson in Hereford in 1960, renaming it after their founder, Lieutenant-Colonel David Stirling in 1984.

From 1996 they started moving staff and equipment to the new Stirling Lines on the base of the former RAF camp at Credenhill on the other side of the city.

They closed the doors at the Putson base in 1999 and on 30 September 2000, they held the Official Opening Ceremony for their new Stirling Lines Headquarters.

In 2007 some of the former garrison houses were sold off but the homes are still mainly occupied by current and former servicemen and women and their families.

John Henry "Brummie" Stokes was born in 1945 in the mining village of Hamstead, just outside Birmingham.

He joined the army aged 17, and after three years he enlisted into the SAS.

During the next 23 years, he served all over the world, including the Falkland Islands, and was decorated several times.

He runs it along with his wife Lynn and a team of qualified staff.

Brummie has been award the British Empire Medal and MBE for his work, and Lynn also has an MBE.

They still live in Hereford.