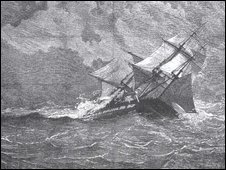 The sinking of HMS Eurydice in 1878 with the loss of 364 lives was one of Britain's worst peace-time naval disasters.

The ship sailed from Portsmouth to the West Indies and Bermuda in 1877.

On its return to Portsmouth the Eurydice was caught in a heavy snow storm off the Isle of Wight, capsized and sank.

The sinking remains a mystery - there have been several ghostly sightings of the ship since.

HMS Eurydice was launched in 1843 as a 921 ton 26-gun frigate - considered to be one of the finest vessels in the Royal Navy.

In 1876 she underwent a routine refit at J White's shipyard at Cowes, and was considered to still be in top-condition after her recommissioning in Portsmouth.

As wooden warships were being replaced by iron ships in the front-line fleet, she was converted into a training vessel under the command of Captain Hare.

In the spring of 1877, HMS Eurydice crossed the Atlantic in only 16 days, apparently handling perfectly.

She arrived off the Isle of Wight on 22 March, at 1500 as Bonchurch Coastguard Station recorded: "... sailing hard for Spithead, moving fast under plain sail, studding sails on fore and main, bonnets and skycrapers." By 1540 she was sailing alongside Sandown Bay.

It was reported that there were two other vessels were in the area - a fishing boat captained by Mr Colenut returning to Shanklin and the schooner Emma, under Captain Jenkins.

The story goes that 20 minutes later a sudden heavy squall accompanied by a blinding snow storm came from the bay.

Mr Colenut put in under Culver Cliff and Captain Jenkins reefed his sails. Yet according to eye witnesses, the Eurydice continued at full sail with her gun ports open before disappearing in the midst of the blizzard. 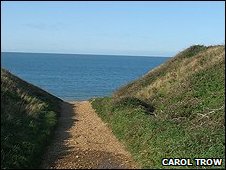 The reasoning behind this course of action has never been resolved. It is possible that Captain Hare thought the navy training vessel could weather the storm, but The Eurydice went down fast.

The frigate was blown to face south-east and was toppled onto its starboard side, where the sea apparently entered through her still-open gun ports.

There was no time to launch any lifeboats and most of the crew were below deck. Ventnor residents are thought to have been standing on the cliffs - dumbstruck at the scale of the accident, which would never have been expected on such a calm day.

In less than 10 minutes the squall had passed, the wind had died down but all that could be seen of the Eurydice was 'the masts and top hampers [upper sails and rigging] showing above the water just about two miles off the island'.

When the blizzard ended, the schooner Emma returned to pick up survivors. Of the five she rescued from the waters, only two, Sydney Fletcher and Benjamin Cuddiford, survived by the time they reached Ventnor Cottage Hospital.

The rest of the crew are thought to have been carried down with the ship - dying of exposure in the freezing waters.

The loss of HMS Eurydice has never been satisfactorily explained.

One of the witnesses to the disaster was a young Winston Churchill, who was living at Ventnor with his family at the time. 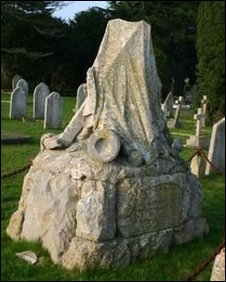 The wreck was refloated later the following September and returned to Portsmouth Dockyard, but had been so badly damaged underwater that she was broken up.

An inquiry found that the vessel had sunk through stress of weather and that the officers and crew were blameless.

With the loss of a large number of local men and boys so close to their home port, a relief fund totalling £23,040 was raised for the many dependents of those lost.

This ship, renamed HMS Atlanta, made two successful voyages between England and the West Indies before also disappearing at sea in 1880 with the loss of 281 lives; the ship is also believed to have been lost in a storm.

Significantly, the sinking of the Eurydice caused the Royal Navy to abandon sail-training. From then on, officers no longer had to learn how to hand and reef sail.

It was a final recognition that the days of the traditional man-o'-war were over. 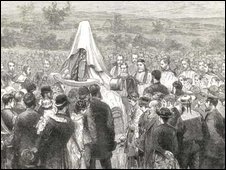 The legend of the haunting of the Eurydice began on the very day she sank.

On the afternoon of the 22nd March 1878 in Windsor, the Bishop of Ripon and Sir John MacNiell were dining when MacNiell suddenly exclaimed, "Good Heavens! Why don't they close the portholes and reef the sails?"

When asked what he meant, he replied that he had had a vision of a ship coming up the Channel under full sail with her gun ports open while a great black squall attacked her.

There was no explanation for that sudden glimpse of the disaster that was happening 70 miles away from him.

Sailors and visitors are also said to have witnessed sightings of a "ghost ship" off the Isle of Wight.

All reported a tall, three mast ship with gun ports open sailing into the Sandown, before suddenly disappearing from view. Many of these have blamed on "freak reflections of light on mist".

Yet in the 1930s Commander Lipscomb was in command of a submarine which was forced to take evasive action to avoid striking a full-rigged ship - the type that was no longer in service around the Isle of Wight at that time. When they looked again, it promptly vanished.

Prince Edward reportedly saw the ship while filming an ITV documentary in 1998.

In 1898, Sherlock Holmes author Sir Arthur Conan Doyle, who was a resident of Southsea at the time, put pen to paper and wrote a powerful poem about the catastrophe called The Homecoming of the Eurydice.

Leading Victorian poet, Gerard Manley Hopkins, also composed a poem in memory of the ship in 1918.