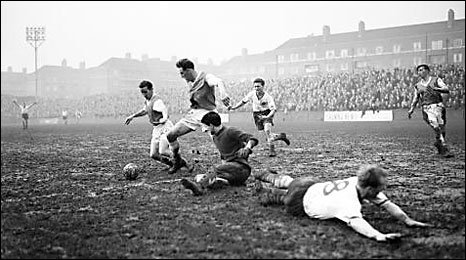 The birth of Exeter City dates back to 1904, when two local soccer sides joined forces - they were Exeter United and St Sidwell's United.

The new club was named Exeter City Football Club, and they made made their home at a field at St James Park - a former pig-rearing patch, would you believe.

Initially, they played in green and white, but soon changed to the red and white kit - the same colours which are still used to this day.

City's first ever competitive match saw them win 2-1 against the 110th Battery of the Royal Artillery in the East Devon League - in front of a crowd of 600.

After starting off in the East Devon League, City entered the stronger Southern League in 1908 - the same year that the club went professional.

In 1914, Exeter City travelled to South America - where they had the honour of playing the Brazil national side.

1920 was a big year for City - that was when they were invited by the Football League to become founder members of Division Three. Their first league game was at home to Brentford on 28 August, 1920. 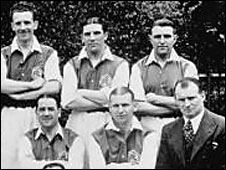 During the 1920s, City sold star player, goalie Dick Pym to Bolton Wanderers - and the £5,000 raised was used to purchase the St James Park ground.

Another player sold on to bigger and better things was Cliff Bastin, who became a superstar at Arsenal in the 1920s, '30s and '40s.

Exeter-born Bastin played 21 times for England, and he was Arsenal's record goalscorer with 178 goals in 396 games - a record not broken until Ian Wright in the 1990s.

In 1931, Exeter reached the sixth round of the FA Cup, where they lost 4-2 in a replay against Sunderland in front of a record crowd of 20,984 - and that record still stands.

The Grecians finished as runners-up in the league in 1933, when prolific striker Fred Whitlow scored 33 goals.

City continued to play in Division Three South right up until the re-organistion of the leagues, which saw the creation of Division Four in 1958.

They won promotion for the first time in their history in 1963-4, when they went up to Division Three.

However, they returned to Division Four just two years later. They stayed in the basement league until 1977, when, under manager Bobby Saxton, they finally achieved promotion again to the third division. 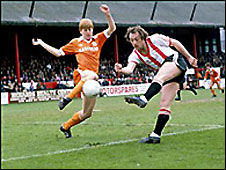 One of the key players during this era was the club's record goalscorer Tony Kellow, who notched 129 goals for the Grecians.

They lasted in the higher league for seven seasons before being relegated - but in 1989-90, with former England defender Terry Cooper at the helm, they were runaway winners of the Division Four championship.

After the ups, come the downs...

Relegated to the bottom division four years later, City had other, off-field problems to face as well. Financial troubles led them to sell St James Park to the developers, Beazer Homes - a move which saw them lose their single, biggest asset.

At this time the club was placed into administration - a situation which ended in late 1996.

Exeter City Council bought the site off the developers in 1996, to ensure the club could continue to play at St James Park, which the council leases to the club.

The recent redevelopment of St James Park was much needed, as the ground had fallen into disrepair. But the cost of the work rocketed, and left City with new financial problems. 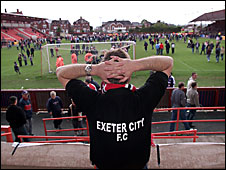 Then, with all these off-field difficulties to contend with, the worst day in City's history came at the end of the 2002-3 season, when they were relegated out of the Football League - where they'd been since 1920.

This was the first year that two clubs went down to the Nationwide Conference - and unfortunately for City, they finished next to bottom in Division Three.

They won their last three games, and finished up just one point adrift of Carlisle and Swansea...it was that close.

2004 was the club's centenary, and saw the visit of the Brazil Masters team to help celebrate.

However, there was no celebrating in the league, where City just missed out on the Conference play-offs in 2004.

They reached the third round of the FA Cup where there were drawn away to Manchester United.

Unbelievably, they drew 0-0 at Old Trafford, and despite losing the replay 2-0, the two games earned hundreds of thousands of pounds for the club.

But the main prize - promotion back to the Football League - again proved elusive, with Exeter finishing one place and one point below the play-offs.

On 20 May 2007, City made their first ever appearance at Wembley - in the Conference play-off final.

They were just 90 minutes away from a return to the Football League, and things were looking good when Lee Phillips gave them the lead against Morecambe.

However, the Lancashire side came from behind to win 2-1.

Grecians are back in the League 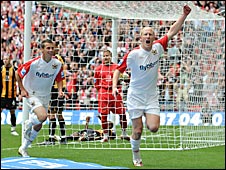 City made no mistake the following year, 2008, when they finally made it back into the Football League with a 1-0 win over Cambridge United in the play-off final at Wembley.

Their unlikely hero was defender Rob Edwards, who scored the only goal of the game to secure City's promotion.

The win, on 18 May 2008, came five years after City were relegated out of the Football League.

And things got even better for the Grecians in 2009, when they were promoted for the second year running.

City finished runners-up in League Two, to earn automatic promotion to League One. They clinched promotion on the last day of the season, with a 1-0 win at Rotherham.