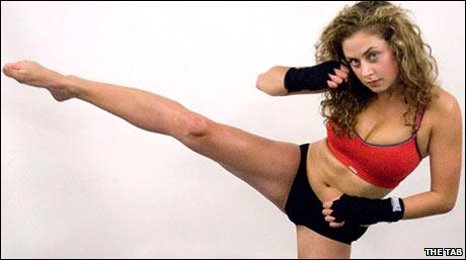 Cambridge Students have been criticised for publishing photos of scantily-clad scholars in an online tabloid.

Launched at the beginning of October, The Tab has been branded by a national newspaper as sexist.

The Guardian's Rowenna Davis refers to it as "poor journalism," which "isn't very funny or clever".

Joint founder of The Tab, Taymoor Atighetchi, said: "If we thought it was sexist, we wouldn't have put it on the website."

Generating over 80,000 website hits with their first publication, students at the University of Cambridge appear to have stumbled upon a winning formula.

The Tab, founded by three final-year students, and intended initially just for consumption by fellow students, is now causing a mini media frenzy.

It was first published as a pilot version in May Week, and proved so popular that its editors spent the summer honing the website, launching it in time for Freshers' Week at the beginning of October 2009.

However, one section of the paper, Tab Totty, featuring photographs of scantily-clad female scholars has caught the attention of a number of national journalists, including The Guardian's Rowenna Davis, who wrote: "Anyone can get hits for nudes; good journalism gets hits without them."

The story has now made it into the columns of most of the UK's broadsheets and tabloids - and has even been featured in the Hindustan Times in India!

And, almost without fail, each additional article generates a barrage of comments from the public, ranging from cries of 'sexism' to 'empowerment' to 'you're missing the point' and the inevitable smuttiness. 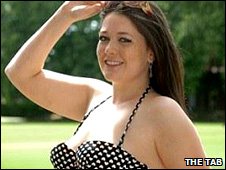 So, what do its founders, Taymoor Atighetchi, Jack Rivlin, George Marangos-Gilks think of the publicity their work is generating?

Atighetchi told BBC Radio Cambridgeshire: "We're pleased that this story has gone national - it's not what we intended to do but now it's raising awareness, and a very important debate about an issue we should be addressing."

Really? Or have these students got more front than The Backs?

"Getting into trouble is not what this is about," insists Atighetchi. "Essentially we want to raise debate and that's what Tab Totty is all about. We are tongue-in-cheek and ironic."

He continued: "We don't want to emulate what The Sun does. We just take the format of a tabloid - we want the fun and funny side of the tabloids - but we don't use the tactics that some of them employ."

Atighetchi added: "People often think of Cambridge University as very high-brow, but at the end of the day we're just students."

And perhaps he's hit the nail on the head with that statement.

Would such a fuss have been made had The Tab not been created by students from one of the UK's elite seats of learning? 'It's not very Cambridge,' is a phrase that's often uttered when students do something that might be considered to be outside 'the norm'.

The Tab's 'totty', however, are by no means the first University students to put down their books and show off their bras.

In 2008, the student-run magazine Vivid printed a photograph of a female student posing on a college bridge in nothing but a thong. The Tab's models are wearing a good deal more than that!

And in 2004, a group of female students formed the Fellowship of the Pole, taking professional classes in pole dancing and performing in clubs to supplement their grants. If memory serves, that didn't sit too comfortably with the University.

This time around, however, the University administration doesn't appear too keen to be drawn into debate about The Tab, a University spokesman saying simply: "It is not a University publication, it's written by students for other students."

Officials have met personally with The Tab's editorial team - which, it should be noted consists mainly of female writers and photographers - to discuss recent events and, according to Atighetchi, are largely supportive of their endeavour.

"They recognise that we are to be taken seriously, but have just asked us to be mindful of what we publish," he said. "The University is very keen to promote journalism and freedom of speech so they're not going to take offence."

Speaking to BBC Cambridgeshire on Friday 30 October, after a week during which The Tab website received so many hits that it crashed on numerous occasions, Atighetchi described the whole experience as "quite bizarre".

"We had 110,000 hits by 3pm today alone," he said. "And we expect that to reach about 300,000 by tonight. People are logging on from all over the world and we've had to downgrade the site just so the server can cope. We've taken lots of the pictures off the front page which makes it faster to upload."

They're hoping that after the weekend things will have calmed down a little as the site is groaning under the weight of users, and the editors are spending hours reading through, and publishing, the thousands of comments the website is receiving from readers.

Atighetchi says it's now time to take stock and think about how to move the site on. The team has plans to recruit more student writers and they are even toying with the idea of selling advertising space to generate funds to move The Tab forward as a company.

"We really believe The Tab model is one of the best platforms for students to get their writing and photographs seen. It's a really good mix of news and social networking."

So successful has this venture been that they may even consider franchising The Tab, taking it into other universities around the UK and helping students to set up their own tabloid sites.

Meanwhile, plans are afoot for the next edition of Tab Totty, which, we are assured, will feature a scantily-clad male student. And no doubt, the debate will continue...

You can read some of the national press articles about the tab by using the links on the right of this page.