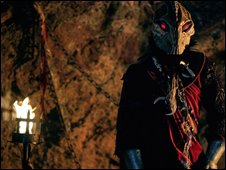 It was a UFO hoax that stumped most of the country - and it happened right on our doorstep.

On 4 September 1967, six flying saucers were found around England, including one in Clevedon.

Was first contact being made in the West of England, or were a group of mischievous students behind the prank?

Sergeant John Durston said it was "identical to the sort of space craft that one sees in science fiction television programmes".

Bristol Aerospace Company even sent down their chief designer to examine the UFO - but they didn't have a clue what it was.

But Sergeant Durston was sceptical that the flying saucer had come from outer space.

"I think that it's some sort of experimental object but for what purpose I'm afraid I don't know."

Reg Woollard, who opened the Clevedon UFO, described the object: "It was about a metre in diameter, half a metre thick with a dome at the top and the bottom."

He said he knew it was a hoax when he prised the device open with a chisel - and saw the battery!

Author John Keeling, who is writing a book about the subject, told BBC Radio Bristol that the reaction to the UFOs varied across the country.

"In the neighbouring county of Wiltshire they gave up and called in the Army who decided the way to get the critters out was to strap plastic explosives on it.

"Amusing as that is, it does pose the serious side of this story.

"What occurred to me after looking into it for a number of years is that rhetorical question: what would we do if aliens landed?

"Are there any contingencies from the authorities for it? This is the classic model to test that, and it would appear that we're not ready."

As to why the students decided UFOs landing was a good prank, Reg added: "Every year they used to do an outrageous rag stunt.

"Two years earlier they built a model of the Gemini space capsule [which was] 10ft long and ditched it in the River Thames near Dartford. That caused quite a flap with the authorities that day as well!"

John Keeling, who is writing a book about the prank UFO, is looking for memories of the event. If you remember the day Clevedon got 'alien' visitors then email him on john.keeling@monkeyspawtv.com