Foraying for fungi in Birstall 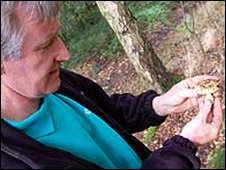 As autumn descends on Oakwell Hall at Birstall don't be surprised to find Dead Man's Fingers! But fear not, they're just fungi...

Countryside ranger Patrick Crowley knows his fungi well and he's brought us to a corner of the grounds where they're flourishing.

"This is what I got into fungi for. This is the 'wow' factor," enthuses Patrick.

These 'mushrooms' come in all shapes and sizes - and some look plain scary.

Pointing things out to visitors which they might not otherwise see is just one part of Patrick's job as countryside ranger and autumn is the best time of the year to hunt out mushrooms.

Patrick explains: "In the winter it's too cold and there's not much around so the organism in the ground isn't doing anything. In spring it's waking up. In summer it's usually too dry. In the autumn the temperature drops a little bit so you get more moisture." 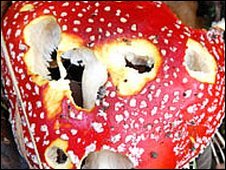 We quickly realise we have some very fixed ideas about what we think of as mushrooms. Patrick points out that mildew in houses or the black spots on roses are both forms of fungi.

He freely admits to being "a bit of a snob" when it comes to fungi: "There are thousands of little brown ones which we usually call LBJs - Little Brown Jobs - and I'm afraid there's not enough time in my life to be learning the differences between them."

Patrick says people often mistakenly claim that mushrooms are edible and toadstools are poisonous, but in fact they are just two names for the same fruiting body. With mushrooms an incorrect identification can have various serious consequences so it's best to go hunting with an expert.

He says: "Every year there are cases of people being poisoned. The one that causes most fatalities is the Death Cap. They say it's responsible for 95% of all deaths."

"Every year there are cases of people being poisoned. The one that causes most fatalities is the Death Cap. "

There are dangers in relying on books for safe identification - no two pictures ever look the same and the mushrooms may well change their appearance. He tells us how the white dots on the Fly Agaric will wash away in heavy rain and its red cap will turn orange or even yellow.

Patrick takes us to Nova Woods on the edge of the Country Park: "It's what covered West Yorkshire many many years ago, and it's where you've got the old trees with years and years of leaves falling down. It's that leaf litter, that organic matter that a lot of fungi are looking for."

If not quite the stuff of legend, fungi certainly have their place in old fairy tales. The red and white Fly Agaric, for example, even looks as though it belongs in a children's book! Patrick says: "There's so much superstition around them. How would this wonderful strange-looking thing appear that wasn't there yesterday? The fairies must have put it there." 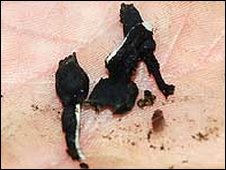 Surprisingly, Patrick tells us he doesn't consider himself to be much of an expert as far as fungi are concerned. He just found himself photographing them and then started to learn their names.

He admits that discovering more about fungi has certainly helped the way he now looks at the countryside, even when the toadstools and mushrooms are not around: "You develop the eye for looking for the signature, for unusual looking things on the ground, and you start noticing a lot more."