Boat made of trash prepares to set sail 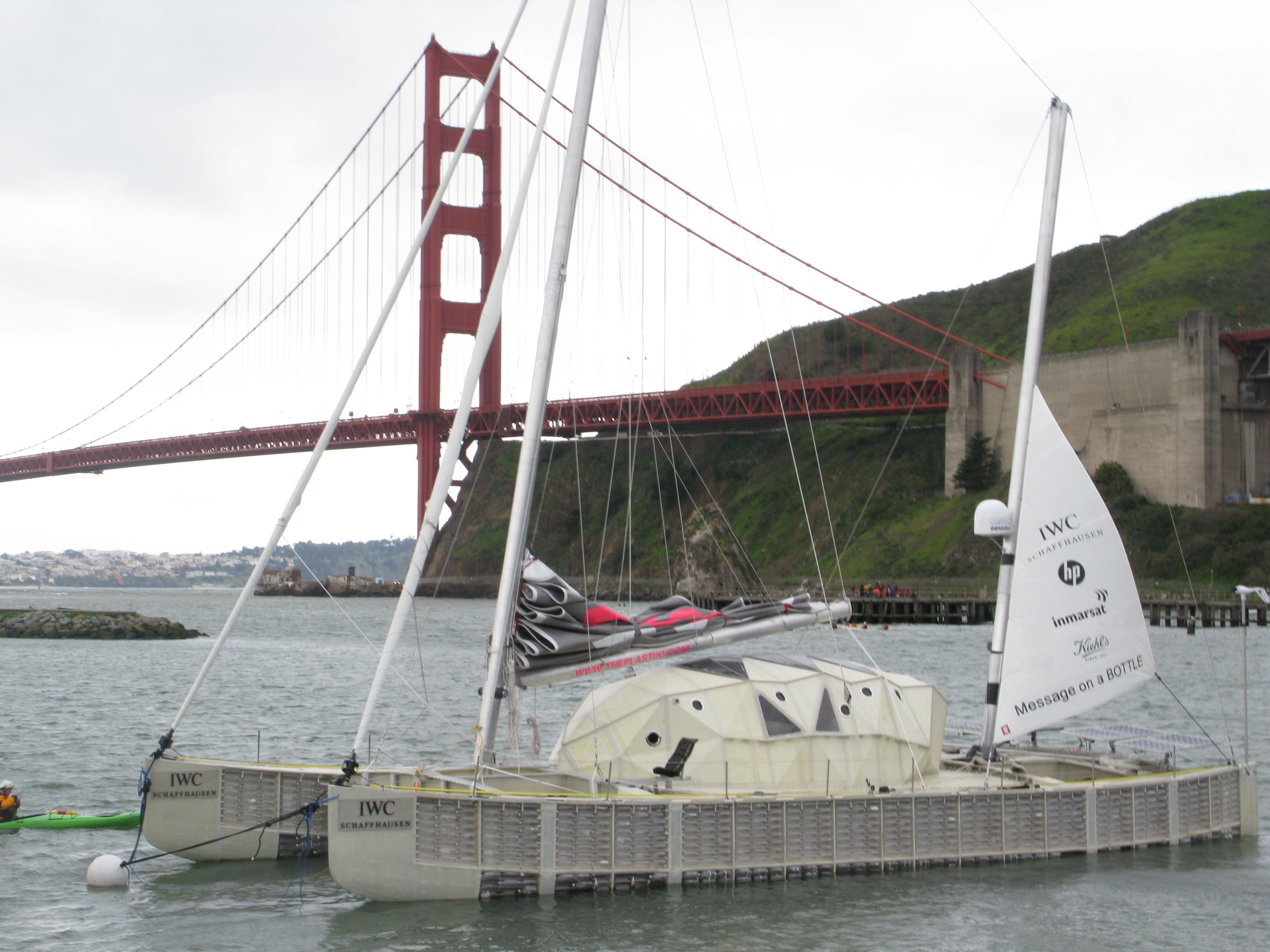 
A 18m (60 feet) long boat made mostly from trash is patiently waiting for fair weather so it can take to the high seas to drive home the environmental message of recycling, reusing and rethinking the way we deal with plastic.

The appropriately named Plastiki, which is made from over 12,500 plastic bottles, will set sail from San Francisco and head to Sydney with eco-warrior and banking heir David De Rothschild at the helm.

He was inspired to set up the expedition after reading a report from the United Nations that said that four out of every five plastic bottles end up in a landfill site instead of being recycled.

"In the United States alone, 38 billion plastic water bottles end up being thrown away," Mr De Rothschild told the BBC.

"That is a resource that can be harvested. Instead of going into the landfill, that plastic could be turned into wind turbines, housing, into new boats - any number of things that would then have less of an impact on the environment."

The 11,000 nautical mile journey the Plastiki is embarking on will centre on a sea of garbage that sits just below the surface between California and Hawaii.

The Great Pacific Garbage Patch as it is known is said to contain so much detritus that it weighs around 100m tons and is about five times the size of the UK or twice the size of Texas.

The United Nations has estimated that 46,000 pieces of plastic no bigger than a cent or a penny, is floating on every square mile of the world's oceans causing untold damage to marine habitats.

"It is time we beat waste and this is an out-of-sight, out-of-mind issue that needs to be addressed," said Mr De Rothschild.

The 31-year-old adventurer, who has completed expeditions to both poles and various jungles, said he also wants to use this journey to highlight other environmental issues and use the Plastiki to raise awareness.

"Our boat may be one giant floating water bottle but it is also a catalyst for a global conversation. We speak for the oceans because they have no voice."

Another source of inspiration for the Plastiki was a 1947 journey by scientist Thor Heyerdahl who sailed a balsa raft named the Kon-Tiki from Peru across the Pacific.

Olaf Heyerdahl, who is a carpenter, retraced his grandfather's footsteps in 2006. He is taking part in the Plastiki project because he has seen at first hand the effects of the devastation.

"I know the oceans are getting polluted and it is good to show people what is happening. When my grandfather sailed in the Kon-Tiki they didn't see any pollution and they had sharks every single day. So many they could hardly swim. When we crossed the Pacific we had four sharks.

"They had tuna every single day, every dinner. We had one tuna during the whole journey," said Mr Heyerdahl.

The Plastiki is one of a kind, taking recycling to a whole other level.

The 12,500 used water bottles are filled with carbon dioxide to make the vessel durable and buoyant. The team has invented a new glue to bond the boat together made of cashew nuts and sugar.

The catamaran, which hopes to set sail in the next couple of weeks, will be powered by solar, wind and sea turbines. An exercise bike will power the boat's laptops and there is also a composting bathroom and gardens to grow food.

A plan to install an infiltration system to turn urine into water was shelved.

"It was a bit like scrap heap challenge where you just wander around and pick up stuff that is suitable," said expedition director Matthew Grey.

"Right from the start, we designed this boat so it could be recycled at the end of its usage."

Mr De Rothschild is particularly enthusiastic about a new material they have developed called srPET. That stands for self-reinforced polyethylene terephthalate, a fully recyclable plastic that he hopes will one day replace fibreglass.

"This is a serious design project with a serious message and real world solutions. We are showcasing solutions on the boat that can come online now and new materials and new glues that can be applied in the real world that will hopefully move the needle for this real world problem."

Being at sea for several months in a confined space with four other people for company is no mean feat.

Olaf Heyerdahl knows the rigours only too well after spending three months at sea on a 52 foot raft.

"You have to be open minded and if you get irritated about small things like body smells, slurping food you will be in trouble."

Mr Heyerdahl is bringing some music with him to help the time go by as well as a copy of Mutiny on the Bounty.

Mr De Rothschild admitted that the journey will have its challenges.

"Personal hygiene will be an issue but when you hit a squall or a downpour, everyone tries to run outside to get a shower so that will help. I am used to living in tents for many months on end. I've spent 100 day in the Arctic and Antarctica in a tent that is a lot smaller.

"I think Kermit the frog summed it up best when he said 'It isn't easy being green'," said Mr De Rothschild.