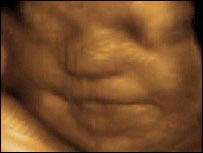 
The last time MPs got a chance to vote on abortion - changing the law in the process - was in 1990.

Then, as now, the foetus' chances of survival were at the heart of the debate.

The upper time limit was reduced from 28 weeks to 24 weeks because of evidence that more and more babies were surviving when they were born at that point.

So amid what is proving a heated debate about the rights and wrongs of the current abortion law, it is worth looking at what the latest survival rates show.

A major study, published just last month, showed babies born after 24 weeks were more likely to live than in the past thanks to advances in medicine.

The study, known as Epicure 2, analysed all severely premature births in England in 2006 and compared their survival outcomes to those born in 1995.

But of those born at 23 weeks the increase from 19% to 26% was not deemed statistically significant as the numbers of babies involved was too small.

And, of course, for all severely premature babies who do survive, there is a significant chance of long-term problems because of the lack of lung and brain development at birth.

And it is evidence such as this that has prompted many of the leading medical bodies to call for the upper limit to remain unchanged.

The British Medical Association, British Association of Perinatal Medicine, Faculty of Sexual and Reproductive Healthcare, Royal College of Nursing and Royal College of Obstetricians and Gynaecologists have produced a joint statement pointing out there is no medical evidence suggesting the limit should be reduced.

Kate Guthrie, the abortion spokeswoman for the Royal College of Obstetricians and Gynaecologists, said: "In this debate we have heard about issues of whether the foetus can feel pain, what it can do at 20 weeks and so on.

"But the last time it was debated and the reason it is being debated now is down to foetal viability and the scientific evidence shows there has been no change at 23 weeks."

However, this does not mean the whole medical community is united on the issue.

There are a number of doctors who believe the limit should be reduced slightly.

Ultrasound pioneer Professor Stuart Campbell, from London's King's College Hospital, said while he was in favour of women having choice, he thought the limit should be reduced to 20 weeks.

"Between 20 to 24 weeks the foetus is really quite advanced in terms of its nervous system. It has facial expressions, it can open its eyelids, it will react to a needle being put on its skin."

And Professor Campbell, who produced scans four years ago of a 12-week-old foetus apparently walking in the womb, added: "It is developing at such a way that it deserves to keep its hold on life."

He also pointed out that survival data takes into account district hospitals when the specialist centres would be doing much better if taken on their own.

And he added the small number of abortions post 20 weeks meant that a slight reduction in the time-limit was unlikely to cause significant problems.

Data from the Office for National Statistics shows that just 1.5% of the 200,000 abortions in England and Wales occur after 20 weeks.

This is a figure which has remained faily stable in recent years with abortion providers saying many of these are women who do not realise they are pregnant because they were young teenagers or breastfeeding mothers who were not having regular periods.

However, the debate comes as the overall number of abortions has risen since abortion was legalised in 1967.

In the first year after the 1967 Abortion Act, just over 22,000 terminations were carried out.

By 1971, the figure topped 126,000 and that has been followed by almost continous rises ever since - even taking into account the increase in population.