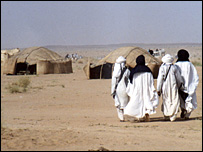 China will invest $5bn (£2.5bn) over the next three years to develop oil production in Niger.

Under the agreement, CNPC will build a 2000-km pipeline and a refinery with a capacity of 20,000 barrels a day.

The investment in Niger's Agadem block near the border with Chad is China's latest move to secure energy resources in Africa.

Niger's mines and energy minister Mohamed Abdoulahi said the deal was a "win-win" contract that benefitted the people of China and Niger.

He said that Niger is expected to produce its first crude in 2009.

Niger is one of the world's poorest countries and ranks in the bottom five on the United Nations human development index.

More than three million people were affected by a famine in the country in 2005.

But China's foray into Africa has prompted accusations of modern day colonialism.

Niger's eastern region, where the country's oil reserves are located, has been relatively unaffected by a revolt by Tuareg rebels.

But China's ambassador to the country, Chen Gonglai, appealed for peace in the country at the contract signing ceremony.

"To develop a nation, you have to have to security," he said.