I'm quite a moderate person but I felt it important to be here today just the fact that it's people of all ages not just extremists has made this a really powerful rally. It's nice that I've seen children and old people and wheelchairs - everyone really. (Sarah)

This has turned out to be quite a juggernaut it's the first time I've been on a march this size - I guess the first time any of us have. I wanted to be here because I believe it's a war without just cause. (Jason) 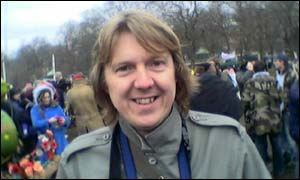 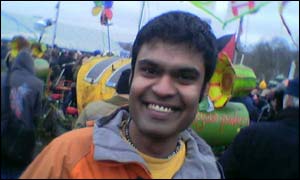 I came on this march because I believe violence begets violence - war is a bad idea and spells trouble for Britain. I never been part of anything like this before I walked down here from Tottenham Court Road and it's quite something to be in amongst so many people from different backgrounds. 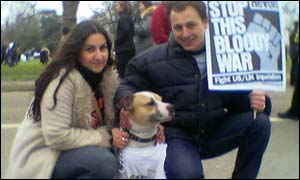 I'd like to hear more people chanting "yes to peace" rather than no war - after all we're trying to fight the concept of war and our message should be solution based. We've been in Hyde Park since the speeches began and it's been really powerful stuff. An Iraqi man stood up and said his people don't want this [war] - he shouldn't still be having to say this after all these years. 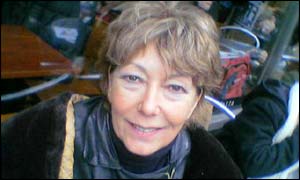 This is my first march since the "ban the bomb" rally of the sixties. I've given up politics and taken up spiritualism but for this I've had to come out of retirement. Saddam Hussein has got to be stopped, but if we go to war then we'll really know what terrorism is. I fear Britain will face retaliation, even in the past week I've been very upset and emotional because of the heightened state of alert. 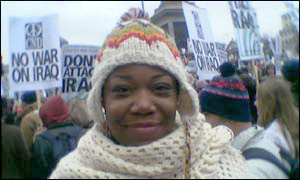 I think we've been lied to about the motives for this war. First George W Bush made a speech about the axis of evil and this morning Tony Blair has been telling us that it's on humanitarian grounds. I don't care how smart those bombs are innocent people are going to be killed. I think the UN inspectors should be given more time to do their job. 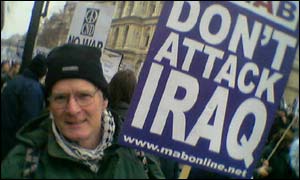 Tony Blair said today that he had to have the commitment to do the right thing in Iraq, but that's not democratic. He should do what the people want him to do. When you get half a million on the street it has got to send a message that he can't just do what he wants without suffering the consequences. I think he'll face a revolt within his own party or be voted out at the next election. 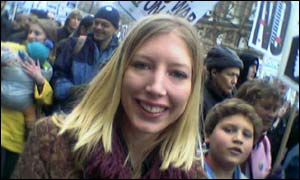 I thought I needed to show that we were against the war so the prime minister can't say that he has the backing of his people. We're following the US but I think it's really trigger-happy after 11 September. I don't think Saddam Hussein should be in power but there are other ways to get him out - I think the weapon inspectors should be given more time.

Links to more UK stories are at the foot of the page.