The Strela-2 can be made less accurate by solar heat and, when used in hilly terrain, by heat from the ground.

It is also susceptible to decoy countermeasures such as exhaust shrouds, flares and infrared devices.

The launcher was originally developed in the Soviet Union in the late 1960s as an anti-aircraft system for targeting both helicopters and jets in ground and low altitudes.

Various versions of the Strela-2 were developed, increasing its range, accuracy and speed. A common improved version is the Strela-2M (SA 7b).

The Strela-2 was widely copied and manufactured in Bulgaria, China, Egypt, Hungary, North Korea and Pakistan among other countries.

Shoulder-launched Sams in general can be launched from up to six kilometres.

Planes from most airports around the world leave the airport's perimeter fences at an altitude that makes them vulnerable. 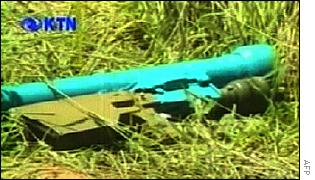 Experts identified the launcher as a Sam 7 Strela-2
More developed Sams than the Strela-2 have more sophisticated seeker systems and can be fired at aircraft from all angles, not just chasing.

Security experts have suggested that the missiles fired in Kenya may have missed their target because the attackers fired when the plane was at too low an altitude.

It is believed that the Israeli airline El Al uses an infrared system - once used by the British military in Northern Ireland - that tampers with the Sam's seeker system, making it less accurate.

It is not known whether such a system was used on the Arkia flight on Thursday.

Six months ago, the FBI warned that civilian aircraft could be targeted by al-Qaeda members using Sams.

Reports suggest that even a basic anti-missile defence system on a civilian airliner could cost in the region of $2m.

Links to more Africa stories are at the foot of the page.